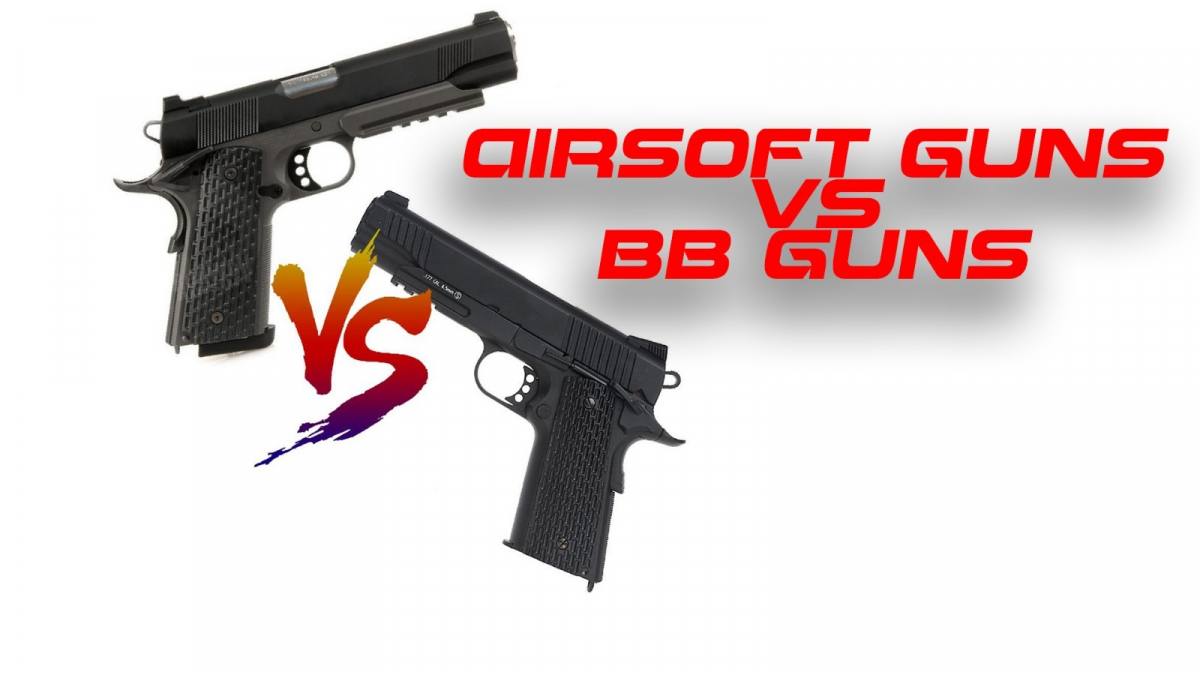 Over the years, we at Redwolf Airsoft have prided ourselves in being a great source of information. In doing so, we have been able to educate many regarding the ins and outs of airsoft.

Continuing in this vein, we have written many blogs about many topics about airsoft guns and in this blog, we will talk about the differences between "Airsoft Guns" vs. "BB Guns"!

Even though there is some overlap, there are some basic differences between the two.

What is an Airsoft Gun?

First, let's start by looking at what are airsoft guns. Essentially, airsoft guns are replica firearms that fire plastic projectiles by use of air pressure. Now, this means you can use a variety of power sources to fire the projectile. For instance, you can use electric, gas, or even springs and high pressured air to power your airsoft gun. In conclusion, you can say that airsoft guns are a very flexible platform. Meaning you can tailor a specific type of airsoft gun to your liking!

Electric airsoft guns or AEGs were invented and popularized by the Japanese airsoft manufacturer Tokyo Marui. As a result, AEGs are considered the most popular platform. After that, many different airsoft brands started investing in this space.

AEGs require the use of a motor and piston system powered by a battery. This means the battery allows the motor to push air out of a piston. Therefore sending the projectile out of the barrel downrange.

In the same vein as AEG, gas airsoft guns use a similar system with a different power source. In other words, much of the operation is similar. First, you fill your gun's magazine up with gas. Secondly, you load your magazine into your rifle or pistol. Finally, after you have loaded your magazine and chambered your round you can fire. Upon pulling the trigger, your gun releases gas into the chamber. In conclusion, the operation of how your plastic BB is fired is the same without the use of batteries and a motor.

Finally, HPA (High Pressured Air) and spring airsoft guns (airsoft snipers). HPA, uses air tanks that are attached to your gun using a hose. However different this setup may be, it functions much like an AEG. Upon pulling the trigger the BB is fired by air delivered into the chamber. Spring airsoft guns rely on the same system. However, instead of a tank and hose, you pull a lever backfilling a cylinder full of air. Upon trigger pull air then pushes through a nozzle firing your BB!

What is a BB Gun?

Before we jump into talking about differences between the two "guns" let's clarify what BB guns (sometimes called Air Guns) are. Sometimes, people think BB guns and Airsoft guns are the same with different names. However, there are some differences! Ammunition is what usually defines a "BB Gun". They use smaller, round metal pellets or BBs. Another difference is the lack of a "hop-up" unit. Finally, BB guns generally have a higher base power.

Airsoft guns vs. BB guns differ primarily in their shapes and size. Many of them come in forms that many of us are familiar with such as pistols, rifles, and even long guns. But, this is where the similarities end.

On the other hand, the higher power of BB guns allow them to act more as a tool. Even though they can still be used for competition, target practice, and some training, utility is where they shine through. Because they use metal or led BB pellets, they are great for pest control or small game hunting. Furthermore, due to their low ammunition cost, they are an ideal tool that can be quite portable.

Can a BB Gun be used as an Airsoft Gun?

If you are considering general uses such as target practice and shooting competitions, BB guns can be used like airsoft guns. You can even use many of the same accessories. For example, many BB gun pistols can use similar holsters, lights, and lasers as airsoft pistols. In the same vein, many airsoft rifles can use slings, sights, and bipods found on BB guns. However, as seen from our Pros and Cons, there are some things that don't crossover very well. For example, you would not take a BB gun to an airsoft game and you would be hard-pressed to do any pest control with an airsoft gun! Therefore, while there is some crossover, we don't recommend you interchange their roles!

In conclusion, you can have fun with both kinds of guns and both have their own benefits. If you are looking for something fun that can also be used as a tool, you can consider a BB gun. However, if you are wanting to enjoy some weekend skirmishes, Airsoft guns are the ones for you!