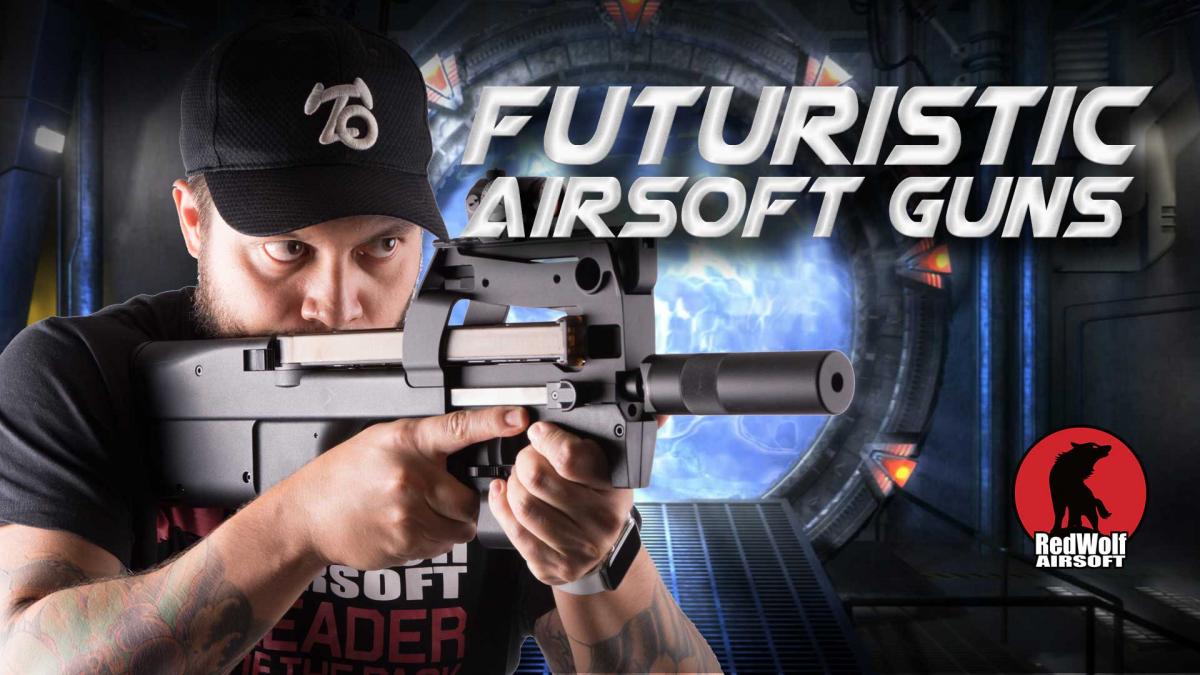 Whilst much of the airsoft industry involves replicating real firearms as closely as possible, the realm of firearms doesn’t just involve the present or the past, but also concepts for the future and even outright science fiction and fantasy. Whether through movies, comic books or video games, futuristic scifi weapons are all the rage and more than a few players will be happy to know that quite a few futuristic airsoft guns exist on the market. It’s also important to note that sci fi airsoft encompasses not just purely fictional guns but also guns that exist in real life that have visually futuristic aesthetic, thus whether you are looking for a futuristic airsoft pistol or a futuristic rifle, here are our top choices for best futuristic airsoft guns.

HOW WE CHOOSE THE BEST AIRSOFT GUN

There are a number of important factors we considered when compiling our list of Best Futuristic Airsoft Gun these include:

FUN FACTOR– Airsoft is a hobby so airsoft guns must be able to generate joy. We look at recoil, sound, design, optional accessories, and overall awesomeness that make the gun interesting. Non-shooting models can also be fun, like a beautiful revolver with realistic ammo that you can load into a rotating cylinder. We rate each of our picks on how much pleasure you can derive from ownership.

REALISM – What makes Airsoft guns attractive for so many is that they replicate real guns. While many manufacturers try their best to recreate the details and feel of a real gun, some succeed while others fail horribly and end up with something more akin to a toy. We rate how real each of our top picks feels and looks.

PERFORMANCE – Power measured in feet-per-second (FPS), range and accuracy are the key metrics we use to determine the best airsoft gun. From there, we also prioritize airsoft guns with an adjustable hop-up and high-quality buckings to ensure that they give the consistency and accuracy you need. All FPS ratings are universally based on 0.2 gram BBs.

BUILD QUALITY – We look for good quality construction, materials and refinement not only in the external components but also internally. The fit tolerances, discernable wobbles and rattles, smoothness of operation, durability of components, etc are all considered.

VALUE – Affordably priced airsoft guns that rank highly in all the above categories are prioritized over more expensive airsoft guns that offer the same, as "bang for your buck" is an important consideration for most airsoft players.  This criteria rates if you are getting more for your money compared to similar guns in the same class, meaning is it a good deal. For more information on how to determine the value of an airsoft gun, check out this article on what goes into the cost of an airsoft gun.

COLLECTABILITY– Sometimes an Airsoft gun stands out simply because it is unique either because it’s not produced by anyone else or holds enough of a cultural or collectable value to make you want to have a piece of history regardless of its utility. This criteria rates whether the gun is a must-have for collectors. Some rare or limited edition Airsoft guns even appreciate in value in the secondary market and we rate their investment value where applicable.

A Star Wars classic, the A180 pistol was a blaster pistol manufactured by BlasTech Industries, used during the reign of the Galactic Empire, one such pistol was wielded by Jyn Erso of the Alliance to Restore the Republic.

With the AW futuristic airsoft pistol, your dreams of owning a piece of the Alliance and the Republic can become a reality. The fully functional pistol is based on an airsoft version of the Lugar P08 and functions exactly like one. The recoil is snappy and with its general lightweight construction, the gun feels incredibly comfortable to hold. The front muzzle device is made out of ultra-lightweight aluminum thus adding no much extra weight to the front of the gun. While it may not shoot laser beams, it sure looks the part as a futuristic airsoft gun.

Possibly the most iconic Star Wars Gun of all, Han Solo's heavy blaster pistol, the DL-44 will be sure to put the same smile on your face as when you first watch the original trilogy. The futuristic airsoft pistol is a faithful replica from the iconic DL-44 and while not only being a replica, you can actually fully use this airsoft pistol as well. The gun itself shoots in both semi and full auto and has features such a full travel slide and lock when magazine runs out. While it may not be able to shoot lasers and blast Imperial Troopers, you can be sure you are getting a special and functional futuristic airsoft pistol from a Galaxy Far Far Away!

A culturally important rifle from the Aliens movie franchise, this electric futuristic airsoft gun is so unique that it's a must for any serious collector. Dependable performance and good attention to detail make this a prop gun that can actually shoot, although Snow Wolf internals means you might do good with some internal upgrades to critical components for greater longevity and performance. Ultimately it’s a fantastic collector gun for fans of the Aliens movie franchise.

CSI Airsoft specializes in crafting futuristic airsoft guns and their XR-5 series seemingly comes straight out of a Sci-Fi movie or video game like Halo or District 9! The rifles parts are injection-molded and uniquely designed. These parts can be swapped out and mixed and matched with others to give you the desired look!

Internally the XR-5 is based on the version 2 gearbox and is compatible with standard M4 AEG magazines. The Hop-up dial is found inside the chamber and all controls are exactly where standard M4 controls are placed. The battery compartment is front wired and can be accessed by removing the handguard, the connector is a small tamyia type and the barrel threading is 14mm CCW. Overall it’s a unique gun that pulls no punches in maximizing its sci fi airsoft credentials.

The Kel-Tec RDB is a modern bullpup futuristic rifle chambered in 5.56 that is the little brother to the RFB chambered in .308. The airsoft version from ARES feels very nimble and it features their tried and tested EFCS system ensuring stable and reliable performance. The rifle is front wired inside the handguard and also employs T-Plug (deans). The RDB is also compatible with standard M4 AEG magazines and comes threaded 14mm CCW. All in all a very futuristic airsoft gun perfect for the sci fi airsoft player.

The KSG futuristic airsoft shotgun is a bullpup design which means the action is behind the grip hand and trigger unlike conventionally laid out long arms; this means the overall length of the shotgun is reduced, making this a very handy shotgun to use. It uses the same system and shells as the other TM gas shotguns (which also share shells with TM spring shotguns) which is handy for those with other TM based shotguns. However there are fewer options for customizing the KSG than there are for the M870 types.

The WE Galaxy Hi-Capa GBB pistol is kind of a hybrid futuristic airsoft pistol. Its claim to fame is its ability to change out the lower frame of the pistol to a platform more suitable to the shooter. Of the three styles, this particular one is based on the WE Hi-Capa lower. This way the Galaxy functions much in the same way regular Hi-Capa pistols work.

The WE Galaxy features snappy recoil, unlike the G Series Galaxy Pistol, this pistol can only fire in Semi Auto. The pistol comes with a top and bottom picatinny rail for the mounting of accessories directly to the pistol without the need for alternative mounting plates. Aesthetically it is the ultimate futuristic airsoft pistol and absolutely will make you stand out on the field.

The EMG / Cybergun P90 is a fully licensed product made by one of the best airsoft manufacturers Krytac. This SMG from FN was originally designed and manufactured in the 1990s with the purpose of being used as a replacement for weapons chambered in 9mm.

The Krytac P90 is one of the most faithful replicas out there; the polymer construction of the gun is superb and is far separated from the plastic used in previous models. The upper receiver is made from lightweight metal and when mated to the polymer lower receiver the gun is robust and solid. One interesting feature found in this futuristic airsoft gun would undoubtedly be its trigger; its travel distance and pull weight are adjustable by swapping out a spring. It’s incredibly quick response is due to its high-tech electronics used and the Krytac P90's magazine has a last-round cut-off feature for more realism.

Categories: Top Picks
Tags: airsoft, airsoft guns, futuristic airsoft guns & anime airsoft guns
Posted By: marketing@redwolfairsoft.com
Primary
Search
Latest Posts
Categories
About This Site
This may be a good place to introduce yourself and your site or include some credits.
Find Us
Address 123 Main Street New York, NY 10001 Hours Monday–Friday: 9:00AM–5:00PM Saturday & Sunday: 11:00AM–3:00PM
My Wish List
Last Added Items
Go to Wish List
You have no items in your wish list.