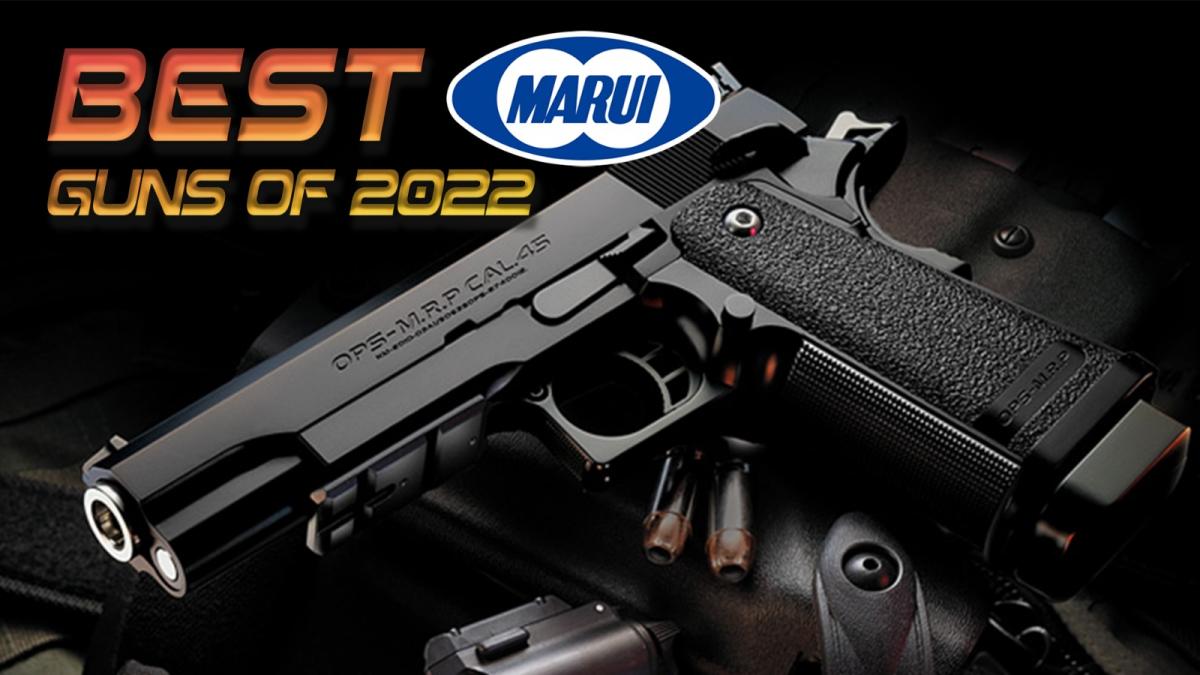 Tokyo Marui started out as a Japanese toy manufacturer before eventually moving into the airsoft space. In 1992, Tokyo Marui revolutionized the airsoft market by introducing the first airsoft guns in the world to be powered by an electric motor.  Before this innovation, all airsoft guns had to be cocked manually before each shot, or be attached to a huge external gas tank using a hose, which was cumbersome and unrealistic. Tokyo Marui's electric airsoft guns, though, allowed for both semi-auto and full-auto fire, making them an instant hit among airsoft players. Before checking out our list, check out the video we did on the best Tokyo Marui Guns of 2021!

An anime-inspired take on the classic 1911, this eye-catching pistol makes for a flamboyant yet highly reliable and accurate sidearm. Its 19-round capacity far surpasses that of an actual 1911, giving this gun all of the advantages that a 1911 offers without the signature drawback of not having as high of an ammo capacity.  Limited supply and hard to find at times make this a desirable collectible.  And if past experience means anything, second-hand trading prices for anime or game based Tokyo Marui airsoft pistols tend to be higher.

One of the largest airsoft pistols on the market, this Desert Eagle replica packs a punch in terms of both FPS and recoil. Its hefty weight and menacing kick make it a great handgun for those who want a realistic Desert Eagle experience.   The large slide cycles back strongly with each trigger pull.  Particularly popular with fans of the Matrix trilogy where this chrome Desert Eagle saw a lot of action onscreen.

Modeled after the Remington 870, this gas-powered airsoft shotgun is capable of shooting either 3 or 6 BBs at a time depending on the mode you select - and with the ability to send each BB downrange at 250 FPS, the M870 Breacher certainly packs a lot of firepower into a compact package.  That may not sound like a high velocity, but getting hit with 3 or 6 BBs at 250fps will surely get your attention. If you want to learn more about some of the best airsoft shotguns, check out our blog.

Another great 1911 replica from Tokyo Marui, this handgun features a throwback design reminiscent of the original 1911s issued to US troops during WWII. With the ability to hold 26 rounds and a power of 240 FPS, though, this handgun is perfectly at-home on modern airsoft battlefields. In addition, the 1911 is one of the most loved platforms for players that enjoy upgrading their pistol. The Tokyo Marui 1911 series of pistols boasts one of the widest ranges of upgrade parts for the player that wants nothing more than to supercharge their pistol for either more realism or the competition circuit!

If you are a player that prefers the AK series over AR15 or M4 patterned rifles, the AK White Storm might be one you want to keep an eye on. This futuristic AK electric airsoft rifle is designed to not only appeal to players that want something different but it also comes with outstanding performance, accuracy, and a unique white colored finish!

Modeled after the futuristic-looking KEL-TEC KSG, this pump-action shotgun delivers a high FPS and a nice, hefty feel that makes it one of the most interesting shotgun models available on the airsoft market. Best of all, this shotgun's bullpup design means that it is able to hold 30, 30-shot rounds while still being quite compact. Its mostly plastic construction might turn some people off but the racking sound and experience will put a smile on anyone's face, quickly making you forget this is a gun made from ABS. Adding to its already impressive features are picatinny rails for lights, lasers, or optics, making this an exceptionally capable airsoft shotgun!

Modeled after the oversized Desert Eagle found in the Resident Evil 2 videogame, this massive pistol is a gun that definitely packs a wallop. You won't be fast-drawing it, and it isn't the most maneuverable option, but it is a hard-hitting gun that is sure to be the most intimidating handgun on your battlefield. Biohazard / Resident Evil guns from Tokyo Marui are proven to be models that appreciate over time due to the continued cult following and success of the video game. These guns are always unique, timeless designs and will also hold cultural relevance!

Modeled after the civilian AR-15 as opposed to the military M4, this attractive airsoft rifle is one of the few models that replicates the civilian variant. Unlike the AR-15, though, this rifle does offer full-auto fire. It also offers a highly modular design that can be easily customized to your preferences. Using Tokyo Marui's own in-house developed gas blowback system, the ZET system, this gun also boats a Tokyo Marui original gun design. Learning from the original M4 style MWS, the MTR16 is made to how Marui wanted. In the same vein as other Tokyo Marui guns, the MTR16's MWS system is highly upgradable! This means you will be able to make this rifle shoot and operate how you want it to! Find out why this gun is one of the best gas airsoft rifles on this blog we wrote!

Featuring a black and gold design, this flashy handgun certainly looks expensive even if its actual price is quite affordable. It also offers functionality to match its eye-catching looks, with a high FPS and a 31 round magazine. The Gold Match is a continuation of the legendary Hi-Capa that has long been considered the industry standard in many categories. The Hi-Capa series leads other airsoft pistols in terms of FPS consistency, accuracy, reliability, and upgradability. The last point, upgradability is probably its greatest strength. No other airsoft gun is quite as upgradable as the Hi-Capa. Every part of the gun can be upgraded to a part or accessory that best suits you as a player! This ability truly allows the Hi-Capa to be the one pistol with the most possibilities!

Categories: Top Picks
Posted By: Mark Anderson
Primary
Search
Latest Posts
Categories
About This Site
This may be a good place to introduce yourself and your site or include some credits.
Find Us
Address 123 Main Street New York, NY 10001 Hours Monday–Friday: 9:00AM–5:00PM Saturday & Sunday: 11:00AM–3:00PM