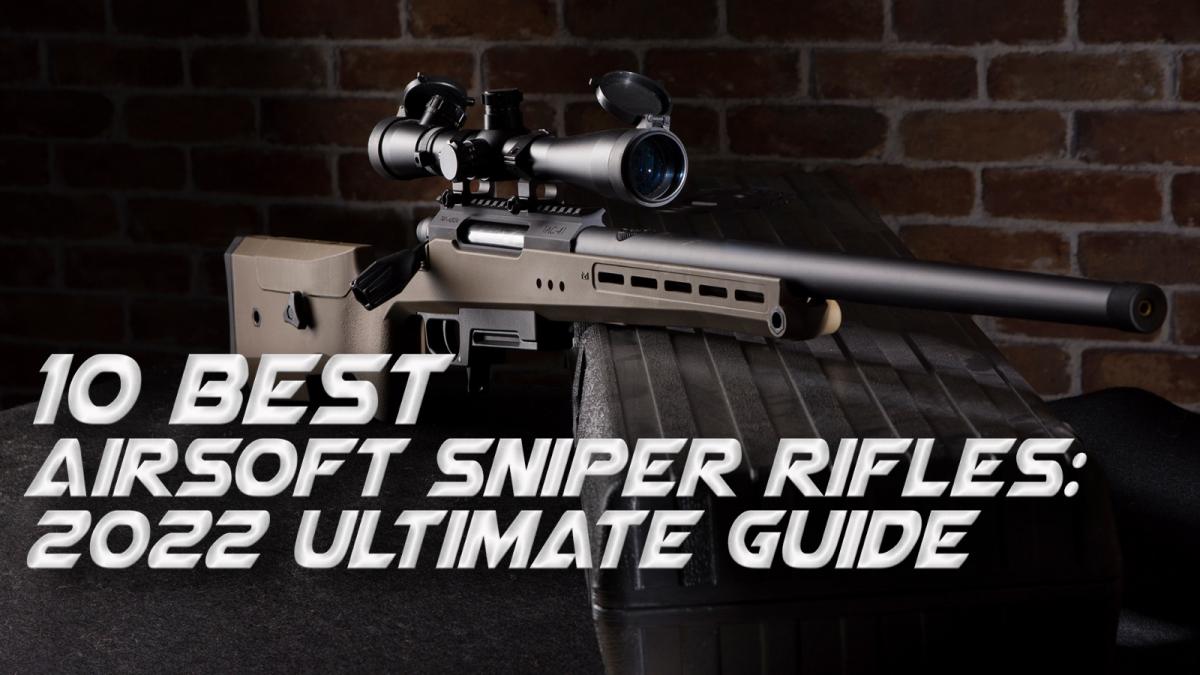 The sniper is the defining position in any big game, but shooting from a distance means you need to find an airsoft sniper rifle that is accurate and reliable. The ability to upgrade power and accuracy are also important as your skills improve. There are many options to choose from, ranging from beginner to expert, across a variety of price ranges.

Finding the best airsoft sniper rifle can be subjective to your personal tastes, but the laws of physics mean that essentially the longer the barrel, the farther you will be able to shoot. Another essential feature of the sniper rifle is the hop-up unit, which puts a backspin on the BB to increase flight distance. A good hop-up unit will add more distance without detracting too much from accuracy.

Performance aside, we all want a good-looking gun, so you will need to consider everything from fit and finish, ergonomics, out-of-the-box performance, availability of upgrade/aftermarket parts, air seal, smoothness of the action, and usability. The best airsoft sniper rifle should feature many if not all of these qualities to make sure you can make pinpoint accurate shots downrange at unsuspecting targets. To learn more about what goes into choosing a great airsoft sniper rifle, be sure to check out our airsoft sniper guide.

With all of that said, let's take a look at the best airsoft sniper rifles available for sale in 2022.

Methodology: How We Determined the Best Snipers

There are a number of important factors we considered when compiling this list of the best airsoft pistols, including factors such as:

Modeled after the iconic H&K PSG-1 sniper rifle, this one-of-kind sniper is sure to attract attention everywhere you take in addition to offering excellent accuracy and a strong, satisfying recoil impulse. The PSG-1 came about as a response to the 1972 Munich Massacre and from that point on, it's been considered one of the best sniper rifle platforms to date. The airsoft version came to us first in electric form from Tokyo Marui and while it was a fantastic gun, it being electric left much to be desired. Finally, this gas version from Umarex fulfilled many people's dreams of finally owning one, especially those that could never get their hands on a real steel one!

Being patterned after the M24, this rifle is used by many law enforcement departments and militaries around the world. If you are looking for a well-rounded and affordable airsoft sniper rifle, you can't go wrong with the Modify Bolt Action Air Rifle MOD24 SF. In addition to impressive accuracy and reliability, this rifle is also one of the most lightweight sniper rifles on the market today. Not to mention, Modify has a long history of making airsoft sniper upgrade parts for a long time, this complete rifle is going to be a great option right out of the box with little to no upgrades necessary.

The Action Army AAC T10 bears stark differences to the previous entry on our list, the MOD24. It's a very modern, incredibly ergonomic, and stylized entry. As one of the most affordable entries on our list, the Action Army AAC T10 Spring Airsoft Rifle offers a lot of bang for your buck thanks to its buttery-smooth action, its lightweight and ergonomic design, and its compatibility with a broad range of aftermarket upgrade parts. Much like MODIFY, Action Army has also made a wide variety of highly sought-after airsoft sniper rifle upgrade parts. Making this rifle ideal for the player that wants something modern, high quality, and ready for customization.

Outside of Japan, Maple Leaf is probably the go-to upgrade parts brand of choice for many airsofters around the world. Renown from their hop-up buckings, chambers, and inner barrels, Maple Leaf has traditionally offered parts designed for precision and long-range accuracy as well as consistency. Their complete airsoft sniper rifle offers impressive features such as an enlarged bolt nub, a high-quality polymer frame, a rubberized gripping surface, and an adjustable cheek riser, there's a lot to like about the Maple Leaf MLC338 Sniper Rifle. Perhaps most impressive, though, is this rifle's out of the box 420 FPS muzzle velocity.

Priced under $200, the ARES Amoeba Tactical 'STRIKER' AST-01 Sniper Rifle is one of the best airsoft sniper rifles on the market for those on a budget thanks especially to its impressive performance and its broad range of adjustable features. For many players trying to get into airsoft sniping, this is the unequivocal rifle of choice as in terms of price and base performance, it has essentially everything you want. Keeping in this same vein, the STRIKER series also comes with a vast amount of first-party parts that allows you to modify, upgrade, and change up the look of the rifle. We previously wrote an article on how to be an airsoft sniper, we feel like it's fitting to include a link to that here when talking about this particular gun.

The M110 has most notably been used by the United States military during its War on Terror in both Afghanistan as well as Iraq. If you are looking for a semi-auto sniper rifle based on the AR platform, the VFC KAC Licensed M110 SASS GBBR is a great option to consider. In addition to exceptional accuracy and reliability, this rifle also offers a strong recoil impulse that anyone who favors a realistic shooting experience is sure to enjoy. The M110 also lends itself to players that want to build specific impressions such as Navy SEALS, Marine Raiders, or other Special Forces Operators.

The Steyr Scout is the first officially named "Scout Rifle" and has since then popularized this size of rifle for years to come since its original release in the real steel world in 1999. Now, anyone searching for a high-FPS bolt-action sniper rifle would do well to consider the ASG Steyr Arms Scout Airsoft Sniper Rifle. In addition to great long-range performance, this first-of-its-kind sniper also features a unique built-in bipod that can be folded back into the gun's fore-end. Its relatively compact form factor lends itself nicely to tight spaces, it even comes with a set of flip-up front and rear sights for shooters that don't want to deal with the hassle of using a scope.

The Silverback SRS series sniper rifles have long been considered one of the best airsoft snipers, even winning several awards at Popular Airsoft Player's Choice Awards! Being fully licensed by Desert Tech from the United States, the Silverback SRS A2/M2 features a wonderfully crisp and smooth action, a lightweight construction, and an M-LOK rail for easily adding attachments, and impressive performance at long ranges in addition to its eye-catching bullpup design, making it arguably the best airsoft sniper rifle on the market today. Silverback sniper rifles might come with what many may consider low FPS, but they have taken the time to develop a complete ecosystem of upgrade parts to allow the user to not only increase the FPS easily but allow you to manipulate the mass of the piston and how much air pressure is driven out of the cylinder to achieve the exact FPS you might desire. This level of control is not seen by many other manufacturers!

For decades the Tokyo Marui VSR-10 has been the leader of the pack when it comes to being the top dog in the airsoft sniper space. Its years of success came from the exceptionally large air volume it can hold in its cylinder, seemingly endless upgrade potential, and overall fair build quality. Coming in well under $200, the Tokyo Marui VSR-10 Pro Sniper Version is one of the best rifles on our list from a value standpoint. While the FPS of this rifle is lower than most due to Japanese laws and regulations, it manages to punch above its weight class in terms of accuracy and consistency.

The Silverback Tac-41P takes the top spot on our list as it is what we feel to be the best example of what the natural evolution of the VSR-10 would be. Boasting the largest air volume in its category, the Tac-41P can sling BBs downrange at a highly consistent FPS with deadly accuracy. Furthermore, Silverback took the time to ensure that there was first-party support for the rifle for players that want to further push the performance of the gun! For a sniper that costs less than $300, there's a lot to like about the Silverback TAC41P Bolt Action Rifle, including its unique design, its high-capacity magazines, its ambidextrous controls, and its included buttstock spacers that allow for a customizable length of pull.

Categories: Top Picks
Posted By: Gambit
Primary
Search
Latest Posts
Categories
About This Site
This may be a good place to introduce yourself and your site or include some credits.
Find Us
Address 123 Main Street New York, NY 10001 Hours Monday–Friday: 9:00AM–5:00PM Saturday & Sunday: 11:00AM–3:00PM
My Wish List
Last Added Items
Go to Wish List
You have no items in your wish list.