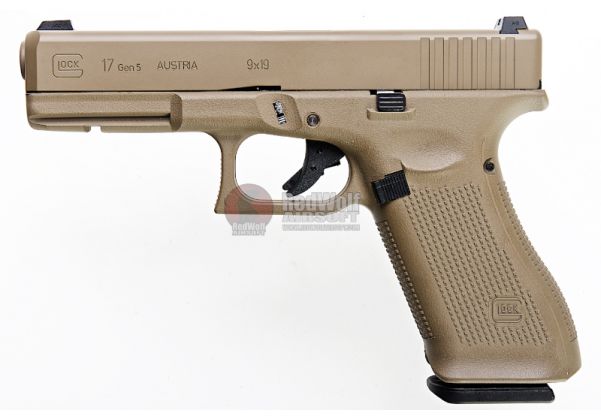 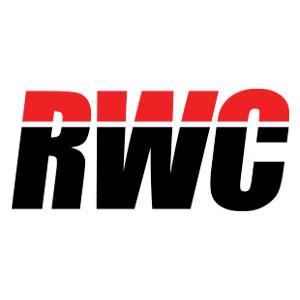 In August 2017, Glock presented the "fifth generation" or "Gen5". The revisions centered on ergonomics and improving reliability. Many parts of fifth-generation Glock pistols cannot be interchanged with those of the previous generations. The two fifth-generation models announced were the Glock 17 and Glock 19, chambered for the 9x19 mm Parabellum. Some conspicuous changes on the fifth-generation models are: ambidextrous slide stop levers, nDLC (Diamond-Like Carbon) surface finish for barrel and slide, a barrel featuring a revised style of polygonal rifling (called the "Glock Marksman Barrel" by Glock), a deeper recessed barrel crown, omission of the finger grooves on the grip, a flared magazine well, and a reintroduction of a (half moon shaped) cutout on the bottom front of the grip. The locking block pin located above the trigger pin that was introduced in the third-generation is omitted. Many internal parts were less conspicuously revised. "Gen 5" is rollmarked on the slide next to the model number to identify the fifth-generation pistols. The magazines were also revised for the fifth-generation models. The redesigned magazine floor plates feature a frontward protruding lip to offer grip for manual assisted extraction and the magazine follower became orange colored for easier visual identification..

The airsoft version faithfully replicas the same features externally. The pistol works on regular green as and fires with a crisp, fast cycle. The added benefit of this being a licensed product is that it can also work with many other accessories designed for Glocks such as weapon lights, holsters, etc. without having to worry if your pistol will be to spec. Most importantly, the Gen 5 Glock features the latest system which boasts incredible recoil impulse, easy to adjust hop up, and extreme gas efficiency!

Being a fully licensed product, all the corresponding markings are the same as what you will find on the real firearm.

UMAREX is the world's largest manufacturer of over-the-counter firearm replicas and the largest importer of air guns in Europe. Founded in 1972, the mid-sized company is now run by the second generation of the two founding families. It has approximately 1,000 employees worldwide. The key to the company's success has been the acquisition of licenses to build replicas of well-known weapons, which then can be sold without restrictions. Umarex currently holds licenses for the brands Beretta, Browning, Colt, Heckler & Koch, Ruger, Smith & Wesson and IWI..