How Old To Play Airsoft: A Guide for Parents and Kids 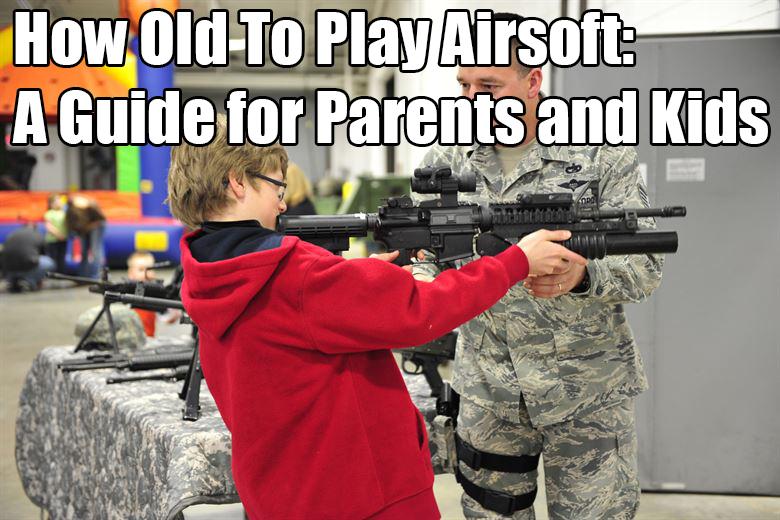 If you’re a concerned parent of a prospective airsoft player or teen looking to get into airsoft, this article will tell you everything you need to know about the legality, age limits, and safety of airsoft.

A game of competitive team shooting, where players eliminate opposing teams by hitting them out of play with spherical plastic (BB) projectiles. These are fired by replica guns known as airsoft guns. BBs don't typically leave visible markings and hits are not always apparent. Sometimes the BB can leave small bruises on the skin, thus the game relies on an honor system. The player who's been hit is obliged to call themselves out.

The majority of airsoft guns are magazine-fed, with some being spring-piston pumps similar to Nerf guns. A plethora of airsoft guns feature some sort of mounting platform compatible with real steel accessories. Thus cosmetically resembling more like a real firearm. You can see why this is so popular for military simulation and historical reenactments. As well as professional gun safety and weapon manipulation training, such as law enforcement, due to it being way safer and lower costs. Perfect for kids to learn about firearm safety and target practice.

Before gameplay, an airsoft gun's velocity is checked through a chronograph, measured in feet per second (FPS). Some countries have set muzzle energy restrictions; going over the legal velocity will have your gun confiscated. Some playing fields further restrict minimum engagement distances, requiring players to yell "Bang Bang!" or another phrase instead of shooting other players at close distances. This is to prevent possible injuries from the close-range shooting.

For Parents: What Age is Appropriate for Airsoft

Though technically airsoft guns are not firearms, so in theory, any age is suitable to play airsoft. To play at an airsoft field the recommended age is 12. If you live in Sweden or Norway, then legally you need to be at least 18 years old to purchase any Airsoft gun. Elsewhere in the world, there are few restrictions. In most cases they can skirmish with buddies on the field, that's if the local airsoft field permits it. Why your kid would be asking to play airsoft is not only to feel and look cool but as well as social development with friends.

A 12-year-old doesn’t want to be labeled as a preteen according to human development experts. Emulating older teens and young adults, it is during this stage that they want to prove they can be responsible. This means being critical of themselves and their appearance, they'll more likely to exercise responsibility in life.

Any 12-year-old can play airsoft safely and educate themself with the right parental supervision. So buying a replica and gear for your 16-year-old son or daughter is not breaking the law. This is the reason why the law sets an age limit for buying airsoft guns but allows kids to participate in airsoft. But you'll have to sign a waiver every time they go out skirmishing, keep that in mind!

For Teens: How Old Do I Have To Be To Have an Airsoft Gun

Airsoft guns are subject to regulations of both state and federal laws, just like any other potentially lethal weapons. So you don't have to fill any paperwork like a real gun.

Some laws restrict purchasing, transportation, or even storage of airsoft weapons. Being a restrictive law is because airsoft guns can shoot projectiles regardless of being seen as a toy. Airsoft gun's appearances resemble very much like a real firearm and may lead to unfortunate outcomes.

To make sure you or your kids are safe we have devised a safety checklist for playing airsoft. This will ensure safety and keeps everyone as safe as they can be on the field.

1. Protective gear worn at all times

Always check your protective gear is on and securely fastened. Just wearing eye protection can be ok for an adult, but if they are kids then they need more. For maximum protection, wear a face mask and eye protection. There are face masks with built-in eye pro or the mesh ones which require an additional eye pro. Whichever style you chose is perfectly fine as they do a great job of protecting your face.

Wearing only a long sleeve shirt and gloves is adequate, and should protect you most of the time. It can sting if you're running around the field with your hands exposed to BBs. That's why the gloves are there to protect them but can limit weapon manipulation depending on the style of the glove. For additional protection to the body, you can opt for body armor such as a plate carrier, elbow, and knee pads.

2. Obeying and understanding the rules

It's a good idea to learn the rules of the airsoft field. Just having the safety gear is not enough! It's important to learn and understand safe-engagement distances. Engaging at a distance of 15 feet or more to avoid accidents or injuries is what most airsoft fields allow. If it's less than that, then just tell them to shout 'bang bang' or 'bingo' instead of shooting someone that close.

Learning common signals to communicate with other players on the field is quite important! Holding your gun above your head and yelling 'I'm out!' should be enough to let the opposition know.

Finding an airsoft gun for beginners is slightly different from selecting a replica for experienced users. Shopping for an airsoft gun there are a few things to keep in mind.

Not all airsoft guns are small, so you have to consider the physical size of your child. If the gun is heavy then it'll be difficult to manipulate in the field. Those with a small frame should avoid using big guns, so something like a pistol or submachine would be more suitable. Be honest to yourself, how mature is your kid? Think about if there's a chance they might take it to school to show off or pretend airsoft replicas are real. If there's a chance they might, then you shouldn't get something that looks like the real deal. To avoid being mistaken for real guns, transparent/colored airsoft guns are a better choice.

The location of where they will skirmish is a factor to consider. If it's close to public areas or a dedicated airsoft field it's best to get transparent or colored airsoft guns. Make sure the orange tip is securely fitted, as it's the only way to know it's a toy visually.

Keep in mind, some fields do have a maximum age limit, as well as other requirements such as existing medical conditions. This isn't to give you a hard time, it's to protect you and everyone else in the field. To be honest it's very difficult to get denied admission to your local airsoft field!

If you're within the minimum age limit, you can skirmish as much as you like. But taking the kids out for a weekend skirmish, be sure they understand the rules. Understanding simple things like the etiquette of handling airsoft guns to avoid mistakes that can lead to injuries.

Have fun out there and stay safe! There's not much else to it once you get a grasp of all this information. The most important is to have a safe mindset and enjoy the sport in a healthy and positive manner.

RedWolf Airsoft supplies a wide range of safety equipment
Categories: About Airsoft
Posted By: Quake
Primary
Search
Latest Posts
Categories
About This Site
This may be a good place to introduce yourself and your site or include some credits.
Find Us
Address 123 Main Street New York, NY 10001 Hours Monday–Friday: 9:00AM–5:00PM Saturday & Sunday: 11:00AM–3:00PM
My Wish List
Last Added Items
Go to Wish List
You have no items in your wish list.