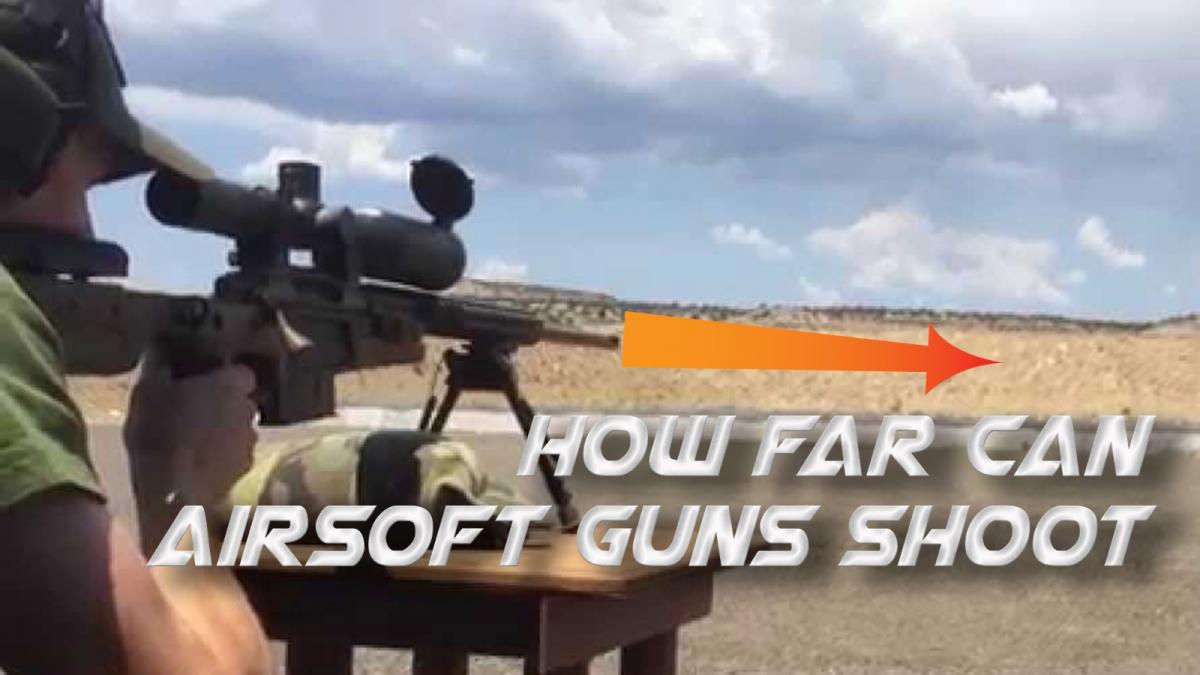 Every airsoft player dreams of owning an airsoft rifle that would make them true long-range assassins. The unfortunate reality, however, is that physics has a big say in dictating how far a plastic BB will travel, and most airsoft guns in stock form won't shoot over 200-300 feet (60m-90m) without flying off-target due to gravity and wind. With that said, there are things you can do to boost the range of your airsoft rifles, pistols, and SMGs. In this article, we'll take a look at everything you need to know about airsoft gun range, including how far airsoft guns shoot based on gun type, the important difference between effective and max range, and the steps that you can take to get a little more distance out of your favorite airsoft guns.

What You Need to Know About Effective vs Max Shooting Ranges

When discussing airsoft gun range, it's essential to understand the difference between effective range and max range. Max range is defined as the maximum distance a BB will travel before gravity takes over and it plummets to the ground.

Just because a BB will travel a certain range before it completely loses its energy, though, doesn't mean that it will do so accurately. Effective range is defined as how far a gun will shoot while still maintaining an effective degree of accuracy; you still might have to adjust for drop and windage even if the target is within your gun's effective range, but you at least have a predictable chance of hitting your target if you're a good marksman.

There are plenty of different factors that can influence both the max and effective range of an airsoft gun, including:

It's simple enough to understand how the airsoft gun's energy or speed impacts airsoft gun range - the faster your BB is flying, the further it's going to travel before it loses its energy. Upping the FPS of your gun, therefore, is one of the most straightforward ways to boost its range. Want to know more about FPS, check out our article on it.

One factor that many people often overlook when thinking of ways to get more range out of their airsoft guns is the BBs that they are using. For maximum effective range, you will want to choose BBs that weigh at least .2g. Other than weight, there are many other factors that go in to making sure you are getting the most out of your BBs. These factors include how well they are polished, their materials, etc. We also have another article talk about that, you can check it out here.

A hop-up is a component inside an airsoft gun's barrel that is designed to impart backspin on a BB as it exits the barrel. Since spinning objects fly much straighter and further than objects that aren't spinning, the quality of your gun's hop-up can have a major impact on its range. Bucking, meanwhile, is the rubber shroud inside the hop-up that makes contact with the BB in order to create backspin, and it's important to have high-quality bucking if you want the backspin on your BBs to be consistent between shots.

Check our hop-ups guide to learn more about hop-ups.

The outdoor elements can have a big impact on your gun's range in more ways than one. Starting with the obvious, a strong headwind can drastically limit your gun's range while a tailwind might actually boost its range a little. The temperature can also impact the range of your gun. This is especially true if you are using a gas gun since gas guns often don't perform as well in cold temperatures.

So, How Far Can Airsoft Guns Shoot?

When you consider all of the various factors that can impact airsoft gun range, you can see why putting a single number to the question of how far airsoft guns shoot isn't all that easy. With that said, the average effective range of airsoft guns across all types and models is somewhere in the neighborhood of 120-180 feet or 36m-54m.

The most useful way to break down this average even further is to look at the average effective range of airsoft guns based on typical FPS ranges:

Knowing the range you can expect depending on your gun's FPS will go a long way toward helping you find the right balance between cost and max effective range when purchasing an airsoft gun.

Another factor that warrants consideration when evaluating the range of airsoft guns is the type of gun in question. An airsoft pistol, for example, is obviously going to have much less range than an airsoft sniper rifle even all other factors are equal. With that in mind, let's take a look at the range you can expect to get out of three main categories of airsoft guns: pistols, shotguns, and rifles/SMGs.

How Far Can Airsoft Pistols Shoot?

How Far Can Airsoft SMGs and Rifles Shoot?

How Far Can Airsoft Shotguns Shoot?

Like their real-life counterparts, airsoft shotguns were not designed for range. However, due to the spread of an airsoft shotgun's multiple BBs, you may find that your effective range with a shotgun is a little closer to the gun's actual max range than it is with guns that shoot a single projectile. With that said, the max range (and thus potentially max effective range depending on whether or not you get a fortunate spread) of most airsoft shotguns is between 75-100 feet (22m-30m).

How to Increase the Range of Your Airsoft Guns

Purchasing a new airsoft gun with higher FPS and higher-quality components is certainly the most straightforward way to boost your range on the airsoft field, but what about increasing the range of the guns that you already own? While you'll never be able to turn a Toyota Camry into a Lamborghini, so to speak, no matter how many modifications you make, there are a couple of simple steps that you can take to get a little extra distance out of your airsoft guns.

For one, it is possible to add a little more juice to a gun's FPS by either upgrading to stronger springs, fixing any leaks around its nozzle, switching from ported to non-ported cylinders, upgrading to an inner barrel with a tighter bore, or some combination of all these options. For more information on adjusting your gun's FPS, check out our article on how to adjust FPS.

Aside from upping the power, the other way to boost an airsoft gun's range is to improve the consistency of the backspin that is placed on each BB by upgrading to a higher quality hop-up. Since consistent backspin plays such an important role in both accuracy and range, investing in a high-quality hop-up can often make it feel like you are shooing an entirely different, much more expensive gun.

Categories: How To Guides & About Airsoft
Posted By: Mark Anderson
Primary
Search
Latest Posts
Categories
About This Site
This may be a good place to introduce yourself and your site or include some credits.
Find Us
Address 123 Main Street New York, NY 10001 Hours Monday–Friday: 9:00AM–5:00PM Saturday & Sunday: 11:00AM–3:00PM
My Wish List
Last Added Items
Go to Wish List
You have no items in your wish list.