What is an Airsoft Hop-Up and Why do You Need It? 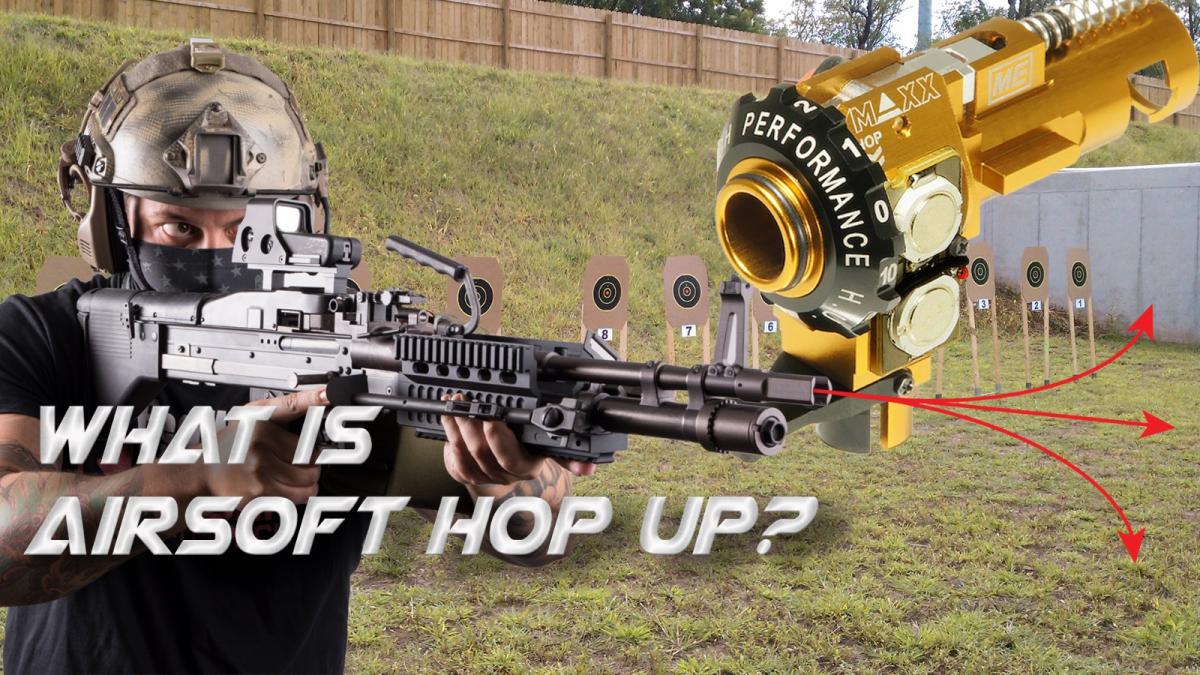 There are a lot of important components inside of a high-quality airsoft gun that plays important roles in making the gun function properly. One such component that is critical to the accuracy of modern airsoft guns is the hop-up. To help you better understand the crucial role of this all-important airsoft gun component, we'll address the question of what is an airsoft hop up and take a close look at how an airsoft hop-up functions.

Why do You Need a Hop-Up?

The short answer of why a hop-up is an essential component in airsoft guns is that a hop-up is designed to make your BBs fly straighter over longer distances. Just like real bullets, airsoft BBs will drop as they lose their energy, requiring you to aim above your target at longer ranges in order to compensate for this drop. Without a hop-up, though, the drop of airsoft BBs would be even more pronounced. Since long-range accuracy is one of the most important qualities of any good airsoft gun, it's fair to say that a hop-up is a critical component in any airsoft gun that is going to be used for engagements beyond close-quarter combat.

How Does a Hop-Up Work?

Hop-ups work by putting backspin on a BB before it leaves the gun's barrel. Anyone who has ever played ping pong or tennis knows that putting backspin on a round object causes it to rise up in the air as it travels along its flight path. This is due to something known as the Magnus effect, which causes objects that are spinning in the opposite direction of their forward movement to rise and objects that are spinning in the same direction as their forward movement to fall more rapidly. In our video before, one of our previous Redwolf TV hosts Tazz explains this in better detail!

So exactly what is an airsoft hop-up, and how is it able to put backspin on a BB before it leaves the gun? While there are several different types of airsoft hop-ups, all of them work via a process known as "hop-up bucking". When a BB passes through the hop-up's chamber, it encounters a slight protrusion at the top of the chamber called a "nub". This nub hinders the top of the BB for a fraction of a second, creating backspin on the BB as it leaves the hop-up chamber and exits the gun's barrel.

Once the BB leaves the gun, gravity immediately starts pulling it down. However, the backspin on the BB created by the gun's hop-up pulls it upward, helping counteract the effect of gravity and limiting the BB's drop over longer ranges.

With this knowledge, you would probably want to dial up as much "hop" as possible. In theory, you would then put more backspin on your BB for longer effective ranges. While in theory, this should make sense, in application, it causes an issue called "over hopping". When we play airsoft, we want to be able to tune our hop-ups for specific ranges, and over hopping will essentially put so much backspin on the BB to where it will effectively shoot progressively upwards as if it's going straight to the sky.

The amount of hop you apply to your gun will also be dependent upon the weight of BB you choose. A good rule of thumb, the lighter the BB, the less hop you will need to dial up and vice versa with heavier BBs.

In addition to helping limit a BB's drop over long ranges, the backspin created by a hop-up also works to stabilize the BB in flight and limit side to side movement as well. By both reducing drop and stabilizing the BB's flight path, a good hop-up can go a long way toward boosting the overall accuracy of your airsoft gun.

There are three main types of airsoft hop-ups, and while they may all function basically the same, there are some important distinctions between them. Some types of hop-ups provide more spin and better accuracy but are more difficult to fine-tune, making it important to know how to do airsoft maintenance if you are going to purchase one of these types. Other types of hop-ups, meanwhile, require less tinkering and are better suited for beginners, but won't provide quite as much long-range accuracy.  The three types of hop-ups on the market today are:

A standard hop-up is what you will find in most airsoft guns. It requires only minimal adjustments to function correctly, making standard hop-ups a great choice for beginners or anyone else who doesn't want to spend a lot of time adjusting their airsoft gun. Standard hop-ups are also the most affordable of the three hop-up types.

While standard hop-ups don't tend to require much adjustment out of the box, they do typically feature an adjustment wheel that allows you to adjust how much pressure is placed on a BB by the hop-up nub.

For those who really want to boost the long-range performance of their airsoft gun, an R hop-up is the ideal choice. Rather than a single nub, R hop-ups feature a rubber saddle that runs the entire length of the hop-up's chamber. This rubber saddle creates prolonged contact with the top circumference of the BB, creating a high degree of backspin that yields much more accurate shots at long ranges.

The unmatched performance of R hop-ups makes them the go-to choice for serious airsoft competitors. However, this improved performance does come at a bit of a cost. In addition to being the most expensive type of hop-up, R hop-ups are notoriously difficult to fine-tune. If you purchase an R hop-up, you can expect to spend a good deal of time adjusting it before the accuracy of your airsoft gun will be optimized. Once it is properly fine-tuned, though, the improved range and accuracy provided by an R hop-up is sure to be well worth the effort.

Most airsoft guns will come equipped with a hop-up out of the box. However, swapping out the existing hop-up in your gun with a higher quality alternative is one of the simplest ways to modify your gun for improved range and accuracy. At RedWolf Airsoft, we are proud to offer a wide range of high-quality airsoft hop-ups, including standard hop-ups, flat hop-ups, and R hop parts. If you are considering upgrading the hop-up in your airsoft rifle, pistol, or SMG in order to improve its long-range performance, be sure to check out these excellent products from our selection of airsoft hop-ups:

Nine Ball is a brand under the Laylax umbrella and is made in Japan. This high-quality hop-up rubber chamber is exceptionally well made and is relied upon by players and competitive shooters around the world. This particular one is a great example as it works with several gas airsoft pistols from Tokyo Marui, namely the Model 17, Hi-Capa Series, P226, even the VSR-10 airsoft sniper! It also provides consistent performance, though it might not work as well with airsoft guns shooting at higher FPS (400+) or heavier BBs at 0.3gs and above.

The COWCOW Technology hop-up chamber is full metal which means it will be inherently more durable and robust than the one that comes with the original pistol. This chamber is a great choice for shooters that are demanding of their pistols and need to run it harder under the prolonged stresses of green gas. This particular type of upgrade part is frequently seen amongst the competition shooting community as they need to be sure that their hop-up chamber stays set and doesn't deviate under hard use! The only drawback, it's only designed to work with Tokyo Marui Hi-Capa series airsoft pistols.

The MAXX Model hop-up can be widely considered one of the best upgrade parts you can get for your electric airsoft gun. The hop-up is precisely made with CNC aluminum making it an ideal upgrade part for the shooter that wants pin-point accuracy from their rifle. The unit is a rotary style hop-up which means it will be easy to adjust and even works with other branded upgrade parts like Airtech Studios' R Hop nubs.

Categories: How To Guides, About Airsoft & Recommended
Posted By: Mark Anderson
Primary
Search
Latest Posts
Categories
About This Site
This may be a good place to introduce yourself and your site or include some credits.
Find Us
Address 123 Main Street New York, NY 10001 Hours Monday–Friday: 9:00AM–5:00PM Saturday & Sunday: 11:00AM–3:00PM
My Wish List
Last Added Items
Go to Wish List
You have no items in your wish list.