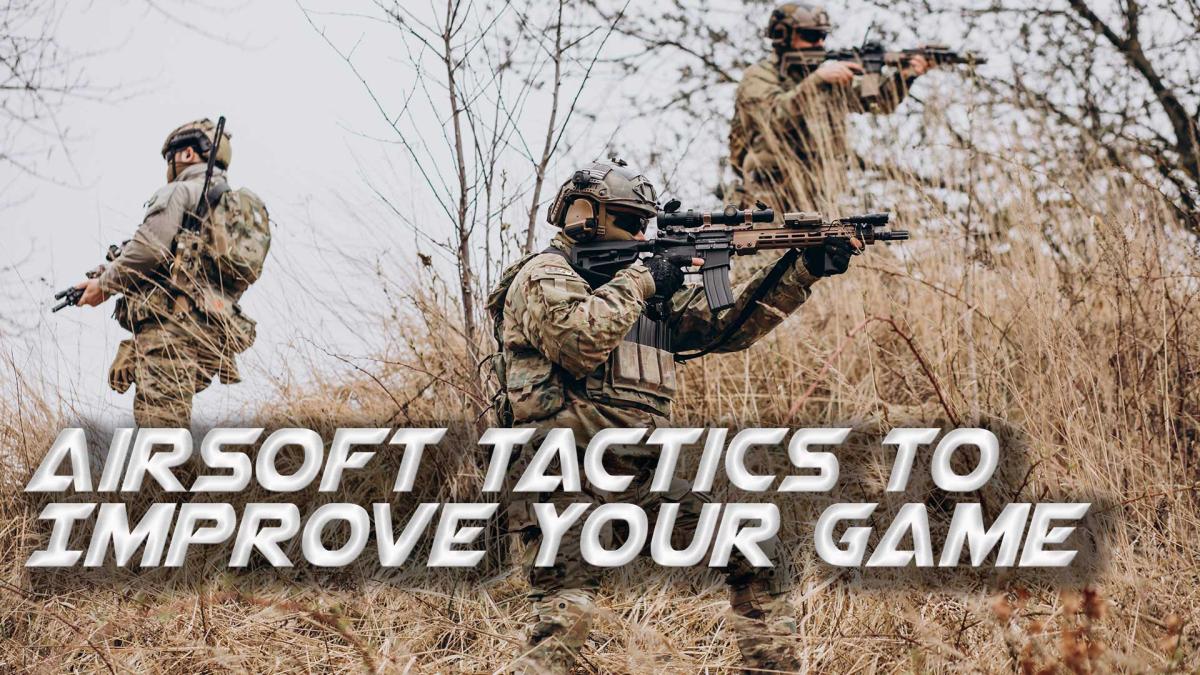 Airsoft Tactics To Improve Your Game

A typical airsoft game is team based sport where two teams play against each other either to achieve a stated objective or to eliminate the other team. Now it must be stated that as airsoft is a hobby and not the military or police, players are free to play in the style they prefer and are not restricted by things like SOPs or doctrine. However you are far more likely to have fun if your team is winning the game else it could turn into a rather painful and frustrating experience.

As with most other team games, the team that best works together and practices superior communication and tactics is overwhelmingly most likely to win over a team consisting of individual players doing their own thing for their own fun. After all, there may be nothing wrong with either approach… until you pit one kind of team against the other and the results speak for themselves. With that in mind, here are several tactics commonly used on the airsoft field that can either help your team come out on top, defeat the opposing team or push back from the brink of defeat.

What Are Airsoft Tactics?

On a fundamental level, tactics are defined as the specific actions or steps you can take to achieve your desired goal or strategy, it must also be noted that a good tactic always has a clear purpose that aids your strategy in the allotted time available. In airsoft, the overarching winning strategy of most games would be to inflict the greatest number of losses on the opposing team while reducing the losses of your own, however depending type of game and the objectives set, the kinds of tactics used to win can vary significantly.

Why is it Important to be Tactical in a Match?

In short, tactics are essential if you want to win. This often requires the players in your team to recognize their relative strengths and weaknesses and work together in order to come out on top. Whilst one might assume that everybody obviously wants to win, being able to work together as a team is not as straight forward and will require leadership, compromises and maybe even sacrifices in order for the team to come out on top. For example to ensure all the team’s flanks are secure some players may have to guard positions that might not have much action in them, this might not be fun but if the opposition attacked that position and nobody was there to guard it, this could’ve resulted in the entire team becoming wiped out

Airsoft tactics, strategies and tips encompass a gigantic library of doctrines, variables and methods that would far outstrip the confines of this blog by a significant margin especially if you factor in all the different gametypes and scenarios they could cover. That being said, we’ve collated three broad tactics that should be applicable almost every team based airsoft game. Whilst some of these tactics like the attack ratio have been adapted from NATO standard infantry handbooks, others such as the importance of the starting rush are naturally only applicable to airsoft.

The first and most important tactic in airsoft is to know where you are playing and which locations within the game site can best help you take on the opposing team; after all there is no greater disadvantage than getting lost!

Take your time to study the game area before going in and note any positions that could be of help to your team. For example, an elevated position could allow a marksman or machine gunner to cover a wide area and spot opposing players before they can spot you while choke points can either be avoided or be used to hinder the enemy’s movements allowing your team to outflank them. Also take note of the enemy’s positions, which locations can, the opposing team use to outflank you? Should you avoid them and not risk casualties or take them in the hopes of giving your team a greater advantage? All these variables should be considered when studying the game area.

For larger sites and game areas, a map and a compass is going to be essential especially if located in a rural area as the topic expands into navigation in general and as such, the value of this tactic increases considerably. If your team is able to master land navigation unlike the enemy you will quickly be able to locate, track ambush and flank enemy squads with near impunity.

It may surprise you to know that most small scale airsoft games are decided within the first few seconds of the game starting. This is due to the tactical advantage a team gets from occupying a site’s most advantageous positions before the other team, allowing them to outflank and take out more players to tilt the balance of power in their favor. Thus it cannot be emphasized enough how important the initial rush is for you to get to the best places in order to win.

To achieve the best starting rush it is essential for the players of your team to understand their strengths and weaknesses beforehand and to assign players to specific locations accordingly. Ideally it’s the fastest and lightly equipped players who should start out as the front as they are the key to securing these important tactical positions first, they do not necessarily have to have the best weapons or even be particularly skilled at using them as all these players have to do is deny the enemy use of the location and hold them off until the rest of the team arrives.

As for the rest of the team, they have to decide who goes where according to their skills and weapons. As mentioned before, an elevated position for example will favor snipers, DMRs and machine gunners who can take advantage of their weapon’s range and firepower to either take out pinpoint targets or suppress the enemy to help your teammates flank them. For locations that demand close quarter engagements, players equipped with short barreled rifles, SMGs and grenades will be preferred as they can quickly maneuver in those tight spaces, push through chokepoints and clear rooms. For players entering dense bush, large magazine capacities will be especially helpful in shooting at visible targets taking cover behind dense foliage.

If your team wasn’t able to achieve Strategy #2, don’t worry it’s not over yet! One of the most crucial strategies an airsoft team should master is to know whether to attack or defend depending on the tactical situation at hand and there are ways to bring down the enemy’s numbers even if they have gained an initial advantage in-game.

The decision whether to push up or defend is usually determined by the estimated manpower strengths of both your side and that of the opposing team. For example, conventional military doctrine posits that in order for an attacker to win decisively, they should possess at least a 3:1 advantage in combat power compared to the defender. Now this isn’t usually feasible for airsoft given that teams are usually balanced out to be equal, but if you do notice that losses in your team are outstripping the enemy’s its usually a better idea to halt all advances, defend the territory you have and let the other team come to you in the hopes of bleeding their numbers down to a more manageable level.

It also helps to go hark back to Strategy #1 and fall back to the advantageous positions your team does control in order to bring the odds back to your favor. After all if the enemy is securely holding an advantageous position it’ll be pointless to simply give them more free kills, sometimes it’s better to bypass or retreat back to somewhere better in the hopes that the other team would make a tactical error instead.

Airsoft Accessories to Improve Your Game

Now whilst the strategies mentioned above were written to be applicable to the widest variety of airsoft players regardless of their training, experience or equipment, there are certainly plenty of accessories that can assist you in conducting those airsoft tactics to their highest potential. The first would be having adequate communications equipment that would allow your team to communicate and coordinate so check out our blog about BEST RADIO SETUPS FOR AIRSOFT COMMS. Second would be to have decent optics and red dots for your airsoft guns, once zeroed properly these sights will significantly increase your first shot hit probability allowing you to take down enemy players quickly and save ammunition. Thirdly an airsoft sling is essential to keeping your gun secure on your body and will prevent you from dropping or damaging it, the less time spent looking for or fixing a dropped gun, the more can be spent winning the game, for more information on airsoft slings, check out our on HOW TO INSTALL & WEAR A RIFLE SLING FOR AIRSOFT.

Categories: Uncategorized
Tags: airsoft & Tactics
Posted By: Andrew Duthie
Primary
Search
Latest Posts
Categories
About This Site
This may be a good place to introduce yourself and your site or include some credits.
Find Us
Address 123 Main Street New York, NY 10001 Hours Monday–Friday: 9:00AM–5:00PM Saturday & Sunday: 11:00AM–3:00PM
My Wish List
Last Added Items
Go to Wish List
You have no items in your wish list.