What is AEG: A Guide to Electric Airsoft Guns 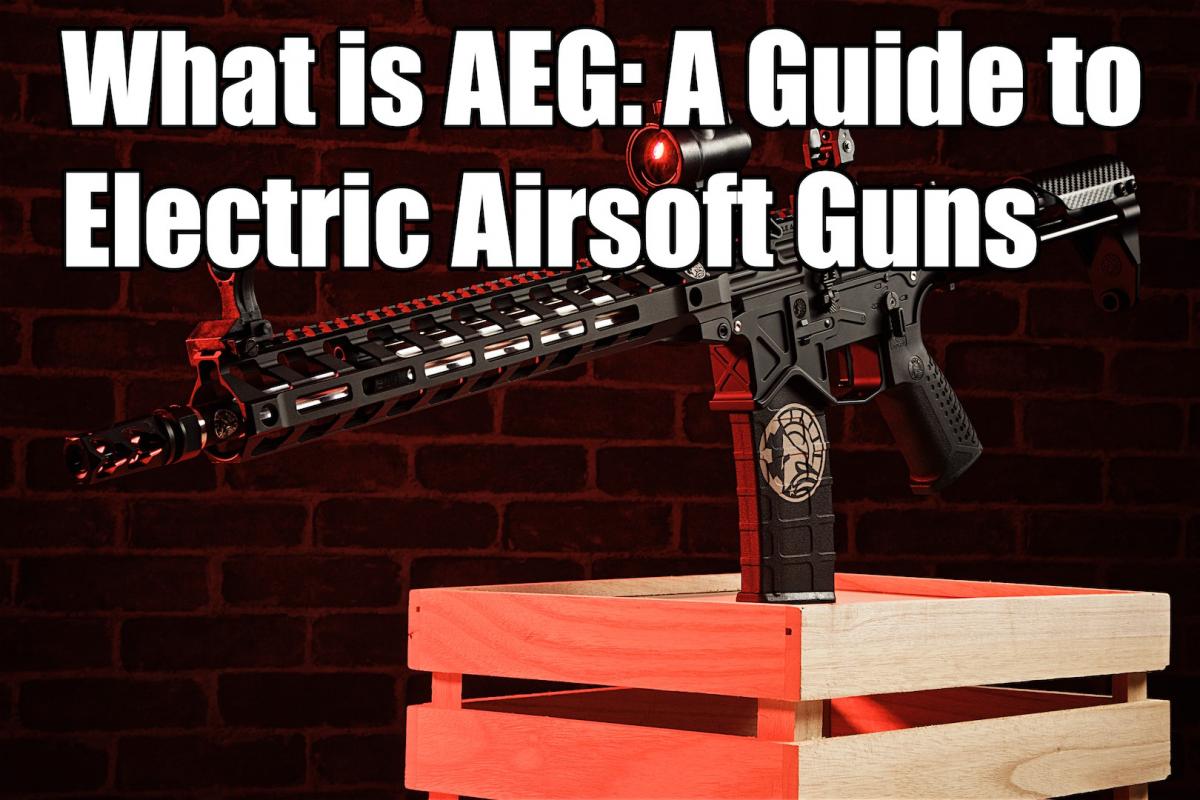 In the realm of airsoft, AEG stands for Automatic electric gun. While other types of airsoft guns use gas or manual pull-back springs to fire projectiles, these battery-powered guns use electricity to drive the firing mechanism. Although the rechargeable batteries make AEGs a less expensive option compared to gas-powered guns, they also offer a less authentic shooting experience due to the lack of recoil.

How Does an AEG Gun Work?

AEG airsoft guns powered by NiMh or LiPo batteries make them very cost-effective compared to gas. This battery powers up a piston inside which propels the BB through a hop up via the inner barrel. The voltage type of the battery (7.4V / 11.1V) will affect its rate of fire so do consider using an 11.1V if you want laser beams spewing out!

But in order to understand how these various internal parts affect each other's performance, we have to understand how it actually operates. Every trigger pull, there are three types of energy in action. They are electrical, mechanical, and pneumatic.

Electrical energy, the battery delivers this through an electrical circuit into the motor. Mechanical energy is to do with the position and motion of an object. It's responsible for the motor moving parts inside the gearbox such as gears and the piston.

What is pneumatic energy? This energy relates to the power-related by the pressurized air pushing the BB out. To blast out a BB, a piston is launched through a cylinder to squeeze the air out of the nozzle.

Contemporary electric airsoft guns use a mechanical system inside, the gearbox contains three gears and a motor that allows the transfer of electrical energy into mechanical energy. It's a simple process that begins with a trigger pull, then the trigger contacts close thus completing the electric circuit from battery to motor. After the motor draws enough energy it will begin spinning and engage the first (bevel) gear. The bevel gear is blocked by an anti-reversal latch, so it doesn't reverse. This bevel gear then engages with the second (spur) gear, which subsequently engages the third (sector) gear.

Once the sector gear makes contact with the piston, it pulls it back in order to compress the spring. Meanwhile, a tiny nub on the sector gear drags the tappet plate back which consequently also retracts the air nozzle towards the cylinder. With this motion set, it allows the next BB to feed up into the hop-up chamber. The tappet plate will return to its original position which then chambers the BB. With the piston released by the sector gear, a spring shoots back launching the piston through a cylinder to force pressured air out. The BB is launched out, mechanical energy which suddenly becomes pneumatic energy.

What Type of Battery Does an AEG Use

Nickel-metal hydride (NiMh), lithium-ion polymer (LiPo), nickel-cadmium (NiCad), and alkaline are the four types of batteries used in an AEG. Barely anyone uses NiCad or alkaline anymore as they are not as efficient or cost-effective. For a detailed article about batteries be sure to check out our other blog about it.

NiMH batteries are like your everyday rechargeable AA batteries, common, very safe, withstand cold weather, and hold charge well which can last for one to two years even when charged often. In recent years the trend in this type is transitioning away to current generation batteries which are similar to tablets or mobile phones (LiPo). NiMH batteries will self-discharge when left alone, especially in a warm environment.

A slow charge is much safer and healthier for these types. They also discharge much faster than any other when left standing, in high discharge applications they can’t reach their full potential. Charging them with more than 1.5 amps or quick discharges will damage the battery.

One feature they all have is keeping a full capacity after each and every charge. When overcharged it can be fixed by safely discharging, that's why it's preferred by many airsofters for its sheer reliability.

Holding way more charge and last longer compared to NiMH batteries, LiPo batteries are the most advanced battery on the market. Used practically everywhere including your mobile phone these are the current-gen of batteries. They come in two voltages, 7.2v or 11.2v perfect for an upgraded AEG that has a high rate of fire. If overcharged they can explode and cause chemical burns, fires, or even death in some cases. With an average price tag of $63 or more for just the battery and another $54 for the charger, it can be expensive. A lot of fraudulent sellers out there that label incorrectly rated batteries that make them even more dangerous. So rest assured as we only sell quality, safe batteries, and chargers.

Unlike the NiMH battery type, there are no methods for optimal and healthy life of the LiPo battery, just make sure to never let it fully discharge. So as soon as your AEG starts to slow down and the gears turn slower with each shot, return to the safe zone and pop some new ones in.

You may have heard of nickel-cadmium (NiCad) batteries, they are similar to the NiMh batteries but bulkier, heavier, and cant handle extreme temperatures well. What's impressive about these is that they are able to quick charge and discharge with almost no damage done to the cells, perfect for guns that draw large energy and high rates of fire! Overcharging causes battery cells to split, and explode so never left alone even with a smart charger.

The OG of batteries, alkaline. You won't see this in airsoft these days because they cannot take the energy consumption from an aeg nor provide a high rate of fire. If stored in a room temperature (70F), or colder environment they can last years before losing a sliver of a charge. Being very common this makes them way more affordable compared to NiMh or LiPo. Due to the chemical property, they can't be recharged numerous times and can't take the high voltage pull that aeg requires.

What Are the Typical Types of Electric Airsoft Guns

The typical type of AEG is usually rifles such as M4 carbines. But not limited to rifles, they come in all forms from pistols, submachine guns, sniper rifles, shotguns to machine guns.

Are AEG Guns Better Than Gas and CO2 guns?

GBB is the most realistic platform currently in the airsoft market. For the airsoft gun to shoot properly, the user must manipulate it like a real firearm. Due to their realistic nature, some law enforcement and military agencies use them as training tools.

A gas blowback airsoft gun utilities a gas reservoir storing pressurized gas (similar to propane gas) known as top gas/ green gas/Co2. Whenever the user pulls the trigger, a knocker will hit the valve on the gas reservoir, causing it to release a small amount of pressurized gas into the GBB platform. The gas will first push the BB out of the chamber, causing it to fire; the remaining amount of gas will cause either the pistol's slide/ the rifle's bolt to move back so the airsoft gun can load the second round for a follow-up shot. However, gas-powered airsoft guns are quite prone to cold weather; when shot too fast, a cool-down effect might occur resulting in a significant fps drop.

As for the AEG platform, instead of needing to manually cocking the piston back, it utilizes a motor and a set of gears to pull the piston back. The AEG should have a battery stored within it; when the user pulls the trigger, it activates a switch that connects the current so the motor will drive the gears to pull the piston backward. This platform will allow users to have much faster follow-up shots, and even allow users to shoot in full auto. This was a revolutionary design back in 1991, but since then many companies mimicked and made aftermarket upgrade parts for this platform. As a result, this is one of the most popular platforms with plenty of upgrade potentials.

Both types are good it depends on what you are after. If your after realism and play mil-sim games then GBB would be a better choice. Most GBB can be taken down just like the real counterpart as well as recoil from the slide/bolt! It is not very cost-effective though as you'll always need to purchase more green gas to play. The magazines have a small round capacity compared to the AEG variant.

AEG may lack blowback action but provides optimal gaming performance without any upgrades. As well as being powered by batteries it's better value for money compared to green gas. Most AEG has a much higher round capacity, averaging between 100 to 300. At the end of the day, it's down to personal preference for which one you prefer, in terms of price they are about the same. We hope this provides an insight into what AEG airsoft is, if you have any questions feel free to chat with us on our live chat service. For more information about these products, click here to learn more!

Categories: About Airsoft
Posted By: Quake
Primary
Search
Latest Posts
Categories
My Wish List
Last Added Items
Go to Wish List
You have no items in your wish list.