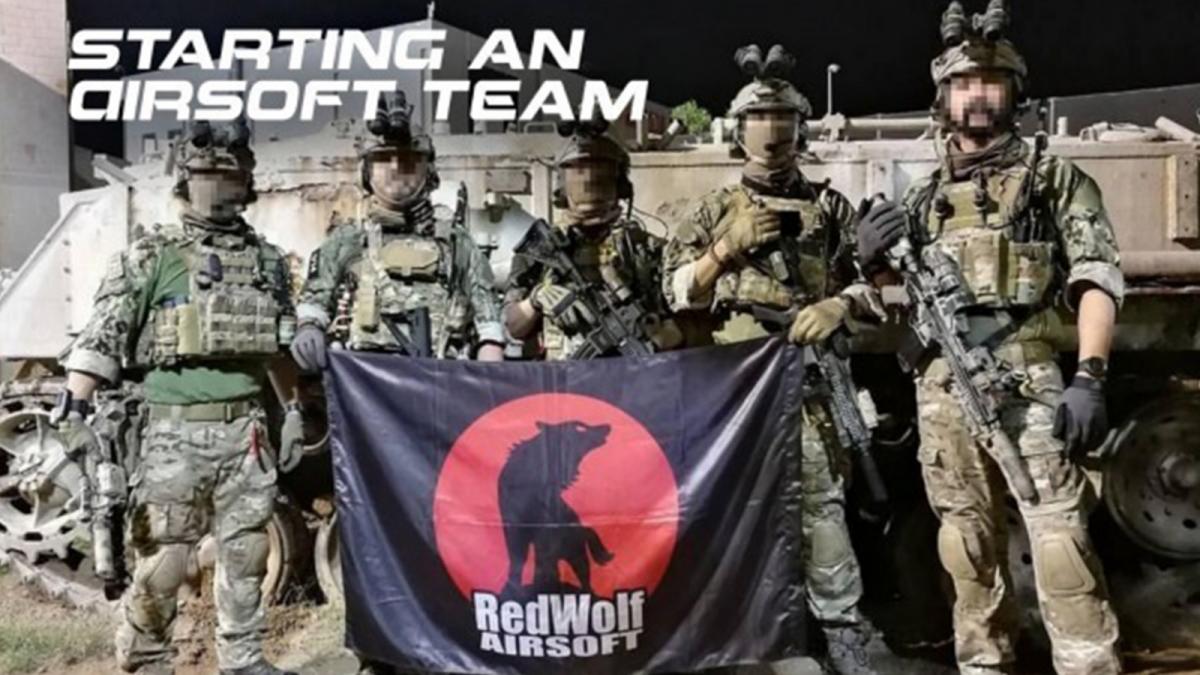 Airsoft is a sport that can be enjoyed in many different ways. From building and collecting airsoft guns to racing on the competition circuit, there are so many different ways to "play" airsoft. However, at its core, airsoft is best enjoyed as a team. There is a certain sense of enjoyment when you are rolling through a field with your buddies as you coordinate attacks, use radios, and play various roles. Much like other team sports, airsoft teams are designed to maximize each member's interests and abilities. In this blog, we want to help you learn how to build a team, discover good practice methods, better understand each member's role, and suggest great team game modes!

Before we get too far ahead of ourselves, let's look at how to start an airsoft team. Obviously, the easiest way is to find like-minded people who want a little more out of their airsoft experience. Look at it like this: There are always those that love playing pick-up basketball at the local courts or playgrounds. However, even though you always play with the same people, their interests only extend to playing some casual pick-up ball. Forming a team is entirely different, seeing you need people who are interested in working together. For an airsoft team, much like a basketball team, you want to look for people who are more serious about the sport than just casual skirmishers on the weekend. While there is nothing wrong with being a casual airsofter, to form a team you will need time dedication outside of just a few hours once or twice a month over a weekend.

Calling back to what I said earlier about airsoft teams being like sports teams, each member plays a certain role. For the sake of simplicity, we will break this down into offense and defense. Typically, in airsoft we see a six man fire team and each person runs a specific loadout and airsoft gun that maximizes their role. With this in mind, some of the basic roles are usually based on certain skill sets or loadouts.

Diving deeper into team composition, in the current day airsoft scene there are two dominant play styles: Milsim and Speedsoft. Milsim is short for Military Simulation and it's based around more traditional military operations and role play. In this style of airsoft team, each member of our aforementioned fire team has designated roles based on their equipment. The team composition usually consists of riflemen, machine gunners, designated marksmen/snipers, and a generalist. This kind of team dynamic can greatly enhance the playing experience of players that enjoy specialization!

This is one of the new phenomenons in airsoft in general. The style of Speedsoft is very similar to paintball where it's a more fast-paced, high-intensity, style of play. Speedsoft not only requires you to be a crack shot but you need to be fit and fast with your movements! Teams that play Speedsoft are the closest thing in the airsoft community one can consider a "sports team". Combining athletics and team strategy, Speedsoft is great for shooters that love to go fast, hit hard, and outsmarting the opponent together as a unit!

Like I previously mentioned there are two kinds of teams depending on your preference and play style. This means you will find different roles for each member of your team. While there are many different game modes you can play, many of the game types will feature the following roles we will discuss. Let's first take a look at milsim roles.

The composition of the milsim fire team as we previously mentioned usually consists of six members. Since we already know their general roles, let's dive deeper into how these roles work. It's a good rule of thumb that each member of your six-man team serves to function as either an offensive player or a predominately defensive player. More specifically, you can classify them as assaulters or support members.

The riflemen element of your fireteam should always serve as assaulters. Your job is to push the objective using coordinated tactics, clear lines of communication, and fluid motion to make sure you are attacking with a unified purpose. Assaulters excel in game modes that include capturing an objective, eliminating opponents, or searching for objectives. Equipment usually used by fire team members that want to act as assaulters usually includes an assault rifle of some kind and a reliable sidearm. Ideally, you want to have multiple magazines at the ready as well as you will be in constant battle as an offensive player.

The support members on the team do a wide variety of tasks to generally "support" the assaulters but also play a key role in defensive gameplay. The biggest support member should be your machine gunner. The machine gunner should be a vital part of your milsim fire team as he is the person that can facilitate a successful assault or swift retreat. The machine gunner's suppressive fire should be used in such a way that it pins down opposing team players. This allows your offensive players to go in and take them out, essentially, defending your assaulters as they move, greatly preventing them from getting hit.

Other support roles include the sniper/designated marksmen. Before we go into the specifics, we have written an extensive blog about how to be an airsoft sniper. We highly recommend this as it breaks down this role very well. You might ask "What is the difference between a sniper and designated marksmen?" While there are some very specific differences, for the sake of simplicity, the difference comes to the choice of weapon. Traditionally the sniper uses a bolt action rifle whereas the designated marksmen use a semi-auto rifle. As I said, there are some more small differences, so for the sake of simplicity, I will use the general term, "sharpshooter".

The sharpshooter role on your fireteam not only provides the most precise levels of support but acts as the force multiplier. For large outdoor airsoft fields, your sharpshooter acts as the eyes of the team. Calling out enemy positions and notifying your squad of movements and strongholds are essential to any airsoft team. In the same vein, the sharpshooter can then lock down a certain area using precisely placed shots to take out targets from afar. The ability of area denial and situational intelligence through observation makes the sharpshooter a key for success!

Speedsoft teams are slightly less straightforward than milsim teams as they do not necessarily have very obviously specific roles. However, they can be broken down into two main categories. You have the players that use speed and fight head-on running as fast as they can to lock down certain areas within the arena. Secondly, have players that flank the opponents from different angles by hiding and sliding into strategic locations. The key to success here is to properly utilize each player's strengths. By doing this, your airsoft team can successfully control the flow of the match, cornering your opponent into areas with little cover.

As we keep within the same theme of sports and athletics, practice and exercising is key to any airsoft team. While you might not be doing a lot of weight training there are still vital skills you need to hone in if you want to be successful as a team and as a player!

Just like a wide receiver working to master his route tree, we should be honing our skills when it comes to working with our tools. It does not matter if you are into playing milsims or into Speedsoft, there are some basic drills you can do to improve your active and passive abilities such as shooting, moving, and reloading!

While some sports require a lot of strength training, the great thing about airsoft is all you need is a little and it will go a long way! With that said, if you feel compelled to hit the gym, by all means, go for it! When you are playing in milsim, ideally you want to ensure your stamina is tip-top! You don't want to be gasping for air only after a bit of running after all. More importantly, if you are into Speedsoft, this is even more vital. In Speedsoft, you want bursts of speed! This means your stamina is even more at a premium!

Surprisingly, if you are a Speedsoft team looking for a league to play in it's remarkably easy. Upon a simple Google search "Speedsoft League" you will be instantly shown results from around the world. Countries such as the United States, Italy, Spain, and even Australia (Gel-Blasters) show up as top searches making it incredibly easy for Speedsoft teams to test their metal! For the milsim teams, this is not as easy. Since there are no "milsim leagues" for players wanting to experience a milsim you will need to search for Operations or "Ops" for short. Depending on your level of intensity and how much you enjoy role-playing, will determine which Ops hosted by which groups are ideal for you! Some include:

In answering the question we posed earlier, "how to start an airsoft team" the answer always lies within ourselves. What do we want from our airsoft experience? We talked a lot about what to do, how you should do it, and why having a team is beneficial but how do we start one? The answer is simple, we mentioned it earlier. Always look for like-minded, passionate people that share the same desires as you. In a sports team, it's the players that want to be there week in week and out that always stick together and have the most fun. In airsoft, we do what we do for fun, to escape our everyday lives, or try to live out our fantasies. Some want to be like our heroes in the military some want to put their skills to the test against other players. At the end of the day, our hobby and sport is always better enjoyed as a group so I would highly encourage you to form a team of your own!

Categories: How To Guides
Posted By: Mark Anderson
Primary
Search
Latest Posts
Categories
About This Site
This may be a good place to introduce yourself and your site or include some credits.
Find Us
Address 123 Main Street New York, NY 10001 Hours Monday–Friday: 9:00AM–5:00PM Saturday & Sunday: 11:00AM–3:00PM