How to Win an Airsoft War! 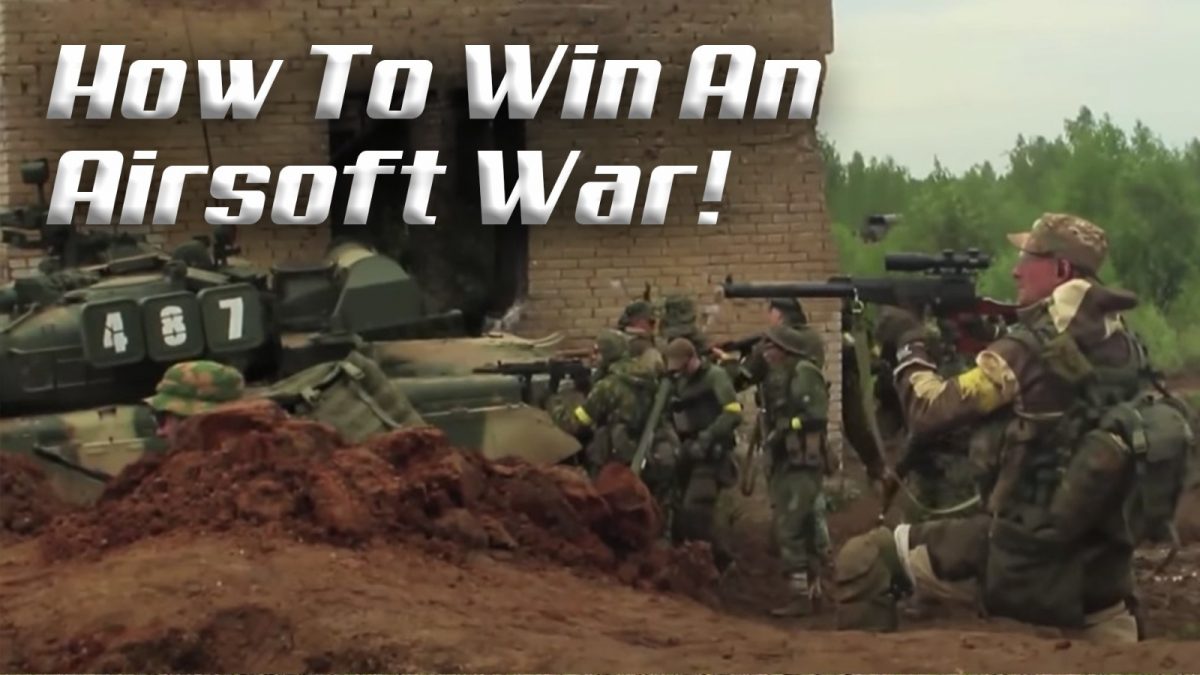 Ever heard of the phrase, 'teamwork makes the dream work'? That's right! How to win an airsoft war really comes down to that particular motto. But it's not that simple as there is a lot more to cover than just overly-used catchphrase.

In this blog, we're going to cover the many different ways one can up their game to help achieve an absolute win in an airsoft war. We at RedWolf Airsoft have dedicated more than 20 years of service to bringing you the best products around.

Not only that, but we make sure you're prepped for all scenarios because a win for you is a win for us too! So strap on your seatbelt as we're taking you on a drive through Multiple-Methods Lane and onwards to the city of Winning.

What is an Airsoft War?

One may think of Airsoft as a bunch of adult-kids running around shooting each other, as true as it may be, but it's so much more than that. A regular Airsoft game can be split into multiple groups.

Smaller events may consist of up to 20 to 100 players, deathmatch style games on regular sites, or even free-for-all which also is tremendous fun. Yes, fields may play a variety of games just to mix things up. Such as T.T.T, Trouble in Terrorists Town, or a Battle Royale style like Hunger Games.

Larger events such as Border Wars, American Milsim, Milsim West, etc. have games that consist of 300 attendees or more. More, being 3000 players which may sound ridiculous but it epitomizes the idea of an Airsoft War. They can occur over a whole day or over a couple of nights. It will test your endurance but provide action-packed missions to accomplish with the help of your friends and many other teams. They may even have tanks which are just mind-blowing!

How to Win an Airsoft War: 6 Tips

Before we dive into it, I do want to note that the idea of Kill/Death ratio isn't as important as you think it is. Sure, taking out many targets is great and all but just because you have taken out the most opposing forces, doesn't mean your team wins.

The best player may have killed 30 players in the entire event with the least amount of deaths, but if they don't accomplish the mission with the rest of the team, you can still lose the game. Trust me, I've played enough Counter-Strike to know that killing the most people and losing the mission is still a loss.

As cheesy as it sounds, working as a unified team is a far better idea than going in as a lone wolf. Why? To answer this, here's another cheesy phrase. Two heads are better than one.

Five is certainly better than two. Having more eyes than just your own will help as a teammates who have your six will cover the sides as well as the rear. Not to just admire your backside, but to check behind you and the rest of your team. Anyone can sneak up at any moment. After all, even a sniper runs with a spotter. Unless you're every Airsoft sniper with a YouTube channel.

2. A Designated Leader Everyone Trusts

A strong leader who is skillful and experienced is imperative to the success of a team's mission. Choose one leader to make all the important tactical decisions in the heat of the moment as their decision can turn the tide of the game. If they have been taken out, make sure to have a second in command.

Here's another catchphrase. Opinions are like buttholes, everyone's got one. Not having a team leader means too many opinions from all team members and that can cause a team to fracture in a firefight.

3. Listen to Command and Be a Team Player!

As fun as it seems to run in guns blazing like John Wick taking everyone out left and right, it's just not a viable option in airsoft unless it's a specific game mode. Playing well with others leads to a successful team. Listening to command and putting others before yourself will automatically classify you as a team player.

Even if you don't know what you're doing most of the time, following simple commands such as "keep an eye on that house", or "cover my six" can make all the difference.

Ever sat down at your computer for an extended period of time and completely forget to drink and eat food? Same thing happens in Airsoft. Albeit, you're more likely to feel thirsty and hungry after a full game day but it's always a great idea to have water on you while in game. Hydration packs are always a fantastic idea!

Food is also very important as protein bars and other nutritious snacks will help keep you going. If you don't drink enough water or eat during an event, you're letting your body and brain suffer.

During an American Milsim event, my commander and I ran 300 meters chasing down the opposing team who hunkered down in a small tower. We managed to take them out, but after that rush, the commander was suffering from dehydration. He felt dizzy and nauseous. It was my duty to let the referee know what was going on and had to pause the event for a brief moment.

All I did to help him was hand him my bottle of water but I had no food. Thankfully, the 'dead' opposing team player offered his protein bar. 20 minutes later, he was up and ready to go again, but we took it slower till the end of the day.

Moral of the story, don't let your body suffer. Keep an eye on your team mates but also the opposing team. You may not win the Airsoft war but you win the battle against dehydration!

5. Take Care of your Airsoft Guns.

An Airsoft gun in prime condition will always help you achieve your team's goal. Not taking care of it, i.e., dirt inside the barrel or not lubricating your gun will cause damage to the internals.

You're in luck as we've already written up many ways to keep your airsoft guns in prime condition. We cover how to clean your inner barrel, how to lubricate your gun, take care of your magazine, and unjamming your replica.

6. Learn to Understand your Surroundings.

This may sound like a broad statement but there are many aspects to cover which can help you win an Airsoft war!

A. Take Cover! Cover me!

Speaking of cover, it's very important to use your surroundings to your advantage in terms of finding cover. When in active engagement with the opposing team, you may have to run from cover to cover, tree to tree, house to house.

You'll also want to cover your teammates as they run from cover to cover. You don't necessarily have to aim and hit your target but hitting close to them, even if you don't know exactly where they are, is enough to force them into cover. This will allow you and your teammates safer passage forward.

B. Prep for the environment!

Choosing the right gun to bring with you can make all the difference. For example, your team is asked to go through an urban area with tight spaces and sharp corners. The last thing you want to do is go in with a sniper rifle as it's just not suited for that kind of environment. If your team has a sniper, ensure that they stay back and have their sidearm out instead.

Compact guns are best for close-quarter battles. No one is stopping you from entering the premises with a DMR or sniper rifle but you're going to feel silly when your gun is dinged by nearly everything around you. Unless you have the Silverback SRS Covert, in which case, go ahead!

If your team isn't in the middle of a firefight, it is always a great idea to be as stealthy as possible. Your mission may be to flank and sneak up on the opposing team. Successfully sneaking up may prove rather difficult if you're having a passionate discussion with your teammate about whether the Arnold Schwarzenegger or Sylvester Stallone was a better action hero. Keep your head in the game, you might notice something your team doesn't. Like a squirrel.

D. Better to be Overprepared than Underprepared!

Running out of ammunition halfway through a game is infuriating and the only person you can blame is yourself. Trust me, I've been through that too many times. Make sure you're stocked up with full magazines and the proper gear. Also, stay hydrated and bring water with you!

E. Think Before You Act

Shooting first and asking questions later isn't always the best option. Each and every action you take will either have negative or positive repercussions but it's always good to go over your options before acting.

Taking everything we had just gone over, here's a little anecdote from the one time I part took in a major airsoft event called Armored War 8 in Russia. One of our many missions was to take a VIP to safety. Sounds easy, right? Wrong, as we had to take him deep into enemy territory before he gave us some vital information. Don't know why he couldn't just tell us while we were in the safety of our home base, but things are never that easy.

There were many times we ran into the opposing team. I had them in my sights and always wanted to take the shot, but since there was so far left to go, shooting our way out of this one isn't an option. I lowered my rifle and we moseyed on to our destination.

Instance after instance, we ran into squadrons and tanks from the opposing team. We'd look to our team leader before we took action. We had to keep on reminding ourselves that the safety of our VIP was detrimental to the success of our mission. Sneaking around them was our only option.

There were moments where we got to see action. Our team was held on one side of a cliff and the only way to get to our destination was to climb over and across a wide open space. Remember when I said that things are never that easy? That's because there was a large amount of opposing team members, including tanks, in our way. We couldn't go around anymore so our best option was to go through them.

They didn't know we were there so we took advantage of this situation. We were equipped with an abundance of ammunition and grenade launchers so we knew we could take them all out if timed correctly, which we did. In one fell swoop, we rained tiny plastic pellets on them like hellfire and managed to take out a couple enemy tanks and squadrons.

Unfortunately, we still had to cross the wide-open space. Our team leader thought it best to casually walk across and blend in with the opposing team. As our colors were very similar, this was a viable option and unsurprisingly, it worked!

Finally, we got the VIP to safety and have vital information that can now turn the tide to winning the airsoft war. We were given information as to where the opposing team leader was situated. Guess what we did with this information? Did we win in the end? Yes, we did!

Categories: About Airsoft
Posted By: Tim Selby
Primary
Search
Latest Posts
Categories
My Wish List
Last Added Items
Go to Wish List
You have no items in your wish list.