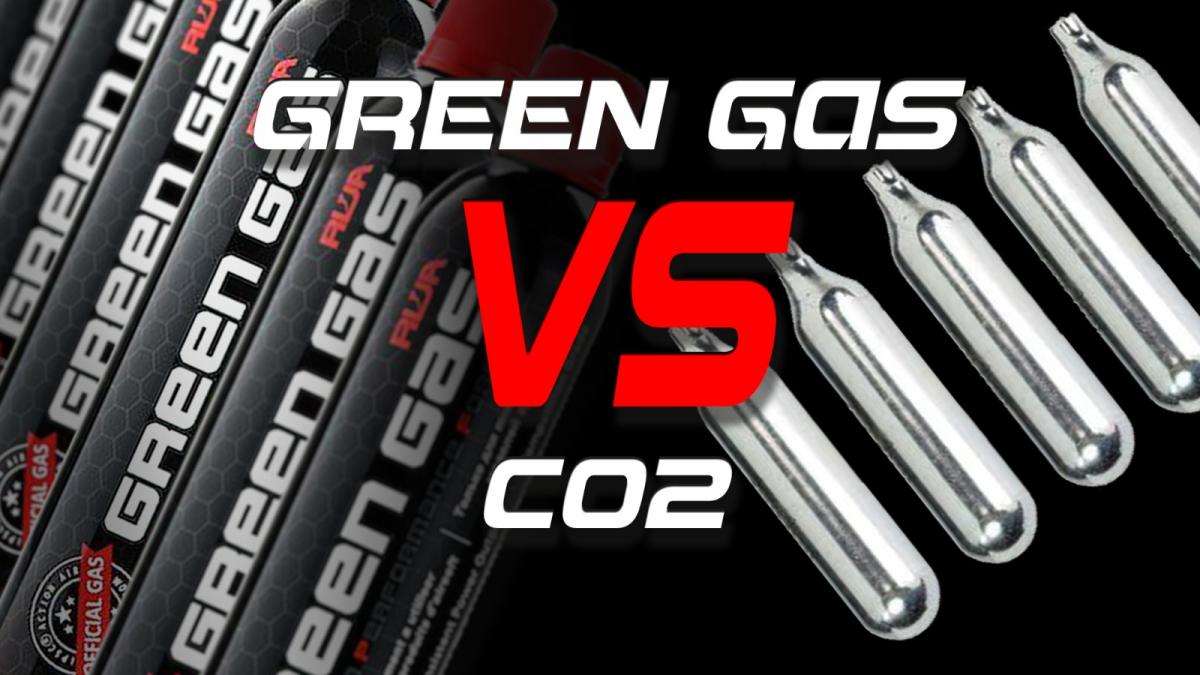 There are a number of ongoing debates within the airsoft community. Perhaps the most lively of these debates, though, is the debate regarding green gas vs Co2. Each of these airsoft propellants presents its own unique set of pros and cons, and there are certainly arguments to be made for using both Co2 and green gas. Ultimately, though, the type of propellant that is best for you will depend on your own priorities and style of play. To help you decide for yourself which side of the green gas vs Co2 debate you fall on, we'll cover everything you need to know about both of these propellants and how they compare to one another.

What is Green Gas?

Green gas is essentially propane with a little silicone oil added in. This addition of silicone oil is meant to help lubricate and clean green gas airsoft guns as they are fired. In addition to silicone oil, many green gas products also include additional additives meant to reduce the strong propane smell. In the end, however, it's the propane in green gas that powers any green gas airsoft gun. In fact, ordinary propane can be used to power green gas guns as well. However, this is not recommended since the silicone oil in green gas does play an important role when it comes to keeping the gun functioning correctly by ensuring that the various o-rings in the gun remain well-lubricated.

Green gas is stored under high pressure within the gun itself as opposed to being stored in an external canister. When stored within the gun, green gas is kept at a liquid state. When you pull the trigger of a green gas gun, though, a small amount of the green gas is released and quickly expands into a gaseous state. This creates the pressure necessary to propel a BB out of the gun. While propane is indeed a highly flammable substance and is typically ignited by most propane-powered products in order to produce energy, no ignition takes place in a green gas gun. Instead, it's the pressure created when green gas converts from liquid to a gas that powers green gas guns.

To help anyone who decides that green gas is the right choice for their needs, we've compiled a list of the best gas airsoft guns of 2021. Be sure to check it out if you are interested in seeing the type of green gas guns that are available today. Or, check out this article to learn more about green gas.

Co2 is the chemical abbreviation for carbon dioxide. It was first discovered all the way back in the early 1700s, and its first uses as an aerosol propellant followed soon after. Today, most aerosol products ranging from hairsprays to cheese whiz are powered by Co2.

As for Co2 airsoft guns, they function quite similarly to green gas airsoft guns. When the trigger of a Co2 airsoft gun is pulled, a small amount of pressurized Co2 is released from the gun's Co2 canister. The released Co2 then rapidly expands and creates the pressure necessary to propel a BB out of the gun.

Aside from the fact that green gas is injected directly into the gun while Co2 is stored within a canister (called a "bulb") that is typically placed within the gun's stock or grip, it isn't any real functionality differences between Co2 and green gas guns that fuel the green gas vs Co2 debate but rather the different properties of the propellants themselves. In the next section, we'll take a closer look at how the properties of airsoft gas vs Co2 compare as well as the pros and cons of each. For now, though, check out this list of the best CO2 pistols of 2021 if you are interested in learning more about some of the best Co2 airsoft guns that are available today.

The main thing that makes Co2 airsoft guns different from green gas airsoft guns is the various pros and cons of the propellants themselves. The biggest argument in favor of Co2 airsoft guns is that Co2 produces higher pressure - which leads to faster muzzle velocities. Other advantages of Co2 include the fact that Co2 tends to perform better in colder temperatures, produces more felt recoil and therefore a more realistic experience, and produces a more consistent power curve over multiple magazines. Co2 also tends to be more widely available than green gas since green gas is only available for purchase at airsoft shops and classified as a "dangerous good", meaning it can't be shipped by air. In Japan, green gas is actually illegal to purchase, and gas-powered Japanese airsoft guns are instead powered using HFC134a - a less flammable but also much weaker version of green gas. HFC134a is however not available in many countries outside of Japan although a non-CFC version has been created in Europe which is called 144a

The arguments in favor of green gas, meanwhile, include the fact that green gas is much cheaper than Co2 as well as the fact that it is easier to "top off" a green gas gun since you can add more gas to the gun from a green gas canister anytime you like as opposed to being forced to swap in a new Co2 bulb.

Of course, there are cons to each propellant as well. The biggest drawback of Co2 is that it is more expensive than green gas. Another drawback to Co2 is that once the bulb is pierced, you have to wait until the bulb is completely empty or decide to waste the remaining Co2 in the bulb before you can top off your gun; there's no way to swap in a new Co2 bulb and still preserve whatever Co2 might be remaining in the bulb that you are removing. Co2 bulbs cannot also not be stored inside the gun for long durations and need to be removed beforehand, once again forcing you to waste Co2 in many instances.

Pros and Cons of Green Gas vs Co2

"Is green gas safe?" is a common question we here at RedWolf Airsoft. Under normal conditions, green gas is completely safe. It is non-toxic unless an extremely large amount is inhaled. The only danger involved with green gas is the fact that it is quite flammable. As long as you keep it away from open flames, though, there is no risk of green gas combusting on its own.

Are There Other Kinds of Airsoft Propellants?

Aside from green gas and Co2, other popular airsoft propellants include HFC134a and high-pressure air (HPA). HFC134a is a weaker form of green gas that is only able to power plastic airsoft guns that require less pressure to operate. However, it is a gas called Freon which is illegal in most countries due to being a CFC and therefore harmful to the Ozone. There is the aforementioned 144a replacement in Europe which is not a CFC. HPA airsoft guns, meanwhile, operate using compressed air as the propellant much like most modern paintball guns. HPA guns can be filled at home using an air compressor if you have the right attachment, but they can also be filled at airsoft shops as well as scuba shops.

Categories: How To Guides
Posted By: Gaz Perkins
Primary
Search
Latest Posts
Categories
About This Site
This may be a good place to introduce yourself and your site or include some credits.
Find Us
Address 123 Main Street New York, NY 10001 Hours Monday–Friday: 9:00AM–5:00PM Saturday & Sunday: 11:00AM–3:00PM
My Wish List
Last Added Items
Go to Wish List
You have no items in your wish list.