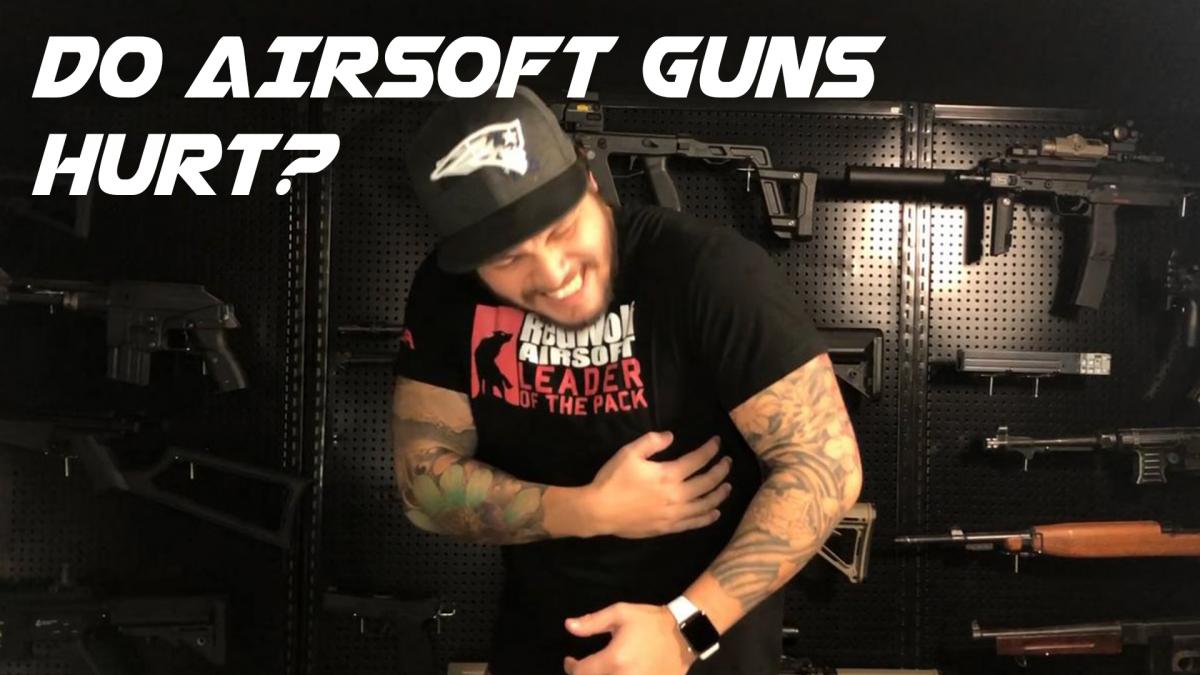 "Do airsoft guns hurt?" is a question that we encounter all the time at RedWolf Airsoft. If you've never been shot with an airsoft gun before, you may be a little hesitant about what it's going to be like. After all, airsoft guns often look just like the real thing and are capable of firing plastic projectiles at quite high speeds.

What Does it Feel Like to Get Shot in Airsoft?

Let's start by saying that getting shot in airsoft is typically not all that painful. However, the level of pain caused by an airsoft BB will depend on a number of different factors, making it a little difficult to describe what it feels like to get shot with an airsoft BB since the feeling can vary so dramatically from situation to situation. Getting shot in the neck from close range without any clothing to dampen the blow, for example, is obviously going to be much more painful than getting shot in the torso from a long way away while you are wearing a heavy jacket.

With that said, getting shot on bare skin from medium range tends to feel like a sharp flick. Getting shot with an airsoft BB is generally considered to be a good bit less painful than getting shot with a paintball since paintballs are much heavier projectiles that typically carry far more energy. Getting shot with a plastic airsoft BB is also quite a bit less painful than getting shot with a steel BB from a BB gun for the same reasons as well as because steel BBs are usually fired from far more powerful airguns. While airsoft gun welts and airsoft wounds can happen in the right circumstances, most of the time an airsoft BB will bounce right off of you without even leaving a mark. This is especially true if you are wearing thick clothing over the area that is struck. You can learn more about the differences between airsoft and paintball as well as airsoft guns vs BB guns by checking out our previous articles.

Factors that Determine the level of Pain in Airsoft

As we've already mentioned, the answer to the question "do airsoft guns hurt" is ultimately dependent on several different factors, including factors such as:

Muzzle energy is usually measured by how fast an airsoft BB is traveling combined with the weight of the BB itself (see above picture). Some airsoft guns are capable of launching BBs at higher speeds, making them more accurate at longer ranges. However, these higher speeds also make the experience more painful for the person being struck, for obvious reasons.

Type / Weight of the BB

As briefly alluded to in the previous point, some types of airsoft BBs are larger and/or heavier than others and there are many factors that go into making great airsoft BBs, you can check out another article for more. But, if a heavier BB is traveling at the same speed as a lighter BB and all other factors are equal, getting hit with the heavier BB is going to hurt more. You might remember from physics class that force = mass x acceleration. The more mass a projectile has, the more force it is going to impart upon impact.

Range of the Shooter

Airsoft BBs are traveling their fastest the moment that they leave the barrel and are continually slowing down from that point forward. This means that getting shot at point-blank range is going to cause a much more noticeable sting than getting shot from several dozen meters out. For this reason, many airsoft fields implement a rule called the "bang-bang" rule. If you are within a certain distance from an enemy - typically five meters or less - then you are required to eliminate them by shouting "bang-bang" rather than actually shooting them. The enemy player is then required to respond the same as if they'd been shot. This rule helps eliminate the potential for airsoft gun welts that are sometimes caused when bare skin is struck with a BB fired from a close-range shooter.

Where You Get Hit

Some areas of the body are simply more sensitive than others. Getting shot in the neck or groin, for example, is likely going to be more painful than getting shot in the arm or leg if all other factors are equal. The face is one of the most painful areas of the body to get shot, and many airsoft players choose to protect their face with a full face shield that covers their eyes and the entirety of their face. The same can be said with fingers so gloves are often advised.

Getting shot on bare skin is obviously going to hurt much more than getting shot in an area that is covered by clothing since airsoft BBs are well short of being capable of penetrating even the thinnest of fabric. For this reason, many airsoft players choose to wear long-sleeve shirts and long pants in addition to protective gear such as helmets, goggles, and face shields. If you are wearing thick clothing over the area that is struck with an airsoft BB, you may barely even feel it at all. It is worth noting that if clothing prevents you from noticing a hit the staff at the airsoft field may ask you to remove some items so as to not ruin the game for others.

How to Mitigate Pain in Airsoft

First and foremost, it is absolutely essential to wear eye protection when playing airsoft. While capable of causing a small sting, airsoft BBs will never cause any lasting damage - unless you are struck in the eye. This makes protecting your eyes something that is of the utmost priority.

Beyond wearing proper eye protection, though, there are a number of other ways to mitigate the pain you experience from airsoft. This starts with choosing the right airsoft clothing and protective gear. If you are able to wear an airsoft outfit that leaves no bare skin exposed, your chances of having a painful airsoft experience are drastically reduced. Of course, this isn't always feasible during certain times of the year and in certain climates. Wearing thick, heavy clothing to an airsoft battle when it is especially warm outside is likely going to be much more uncomfortable than getting hit on exposed skin from time to time. Nevertheless, constructing your airsoft outfit so that it covers as much skin as possible is by far the best way to mitigate the pain of getting struck by an airsoft BB.

In addition to choosing the right airsoft clothing and protective gear, another way to make playing airsoft a less painful experience is to go to a field that enforces rules designed to promote a safe, pain-free experience. Many airsoft fields, for example, limit the FPS of guns allowed on the field, require that players shout "bang-bang" rather than firing from close range, and do not allow players to use full-auto fire while they are indoors. Rules such as these can go a long way toward making airsoft less painful and more enjoyable for everyone involved. Also, remember to use proper etiquette when playing, this ensures both the safety of other players and yourself!

Categories: About Airsoft
Posted By: Gambit
Primary
Search
Latest Posts
Categories
About This Site
This may be a good place to introduce yourself and your site or include some credits.
Find Us
Address 123 Main Street New York, NY 10001 Hours Monday–Friday: 9:00AM–5:00PM Saturday & Sunday: 11:00AM–3:00PM
My Wish List
Last Added Items
Go to Wish List
You have no items in your wish list.