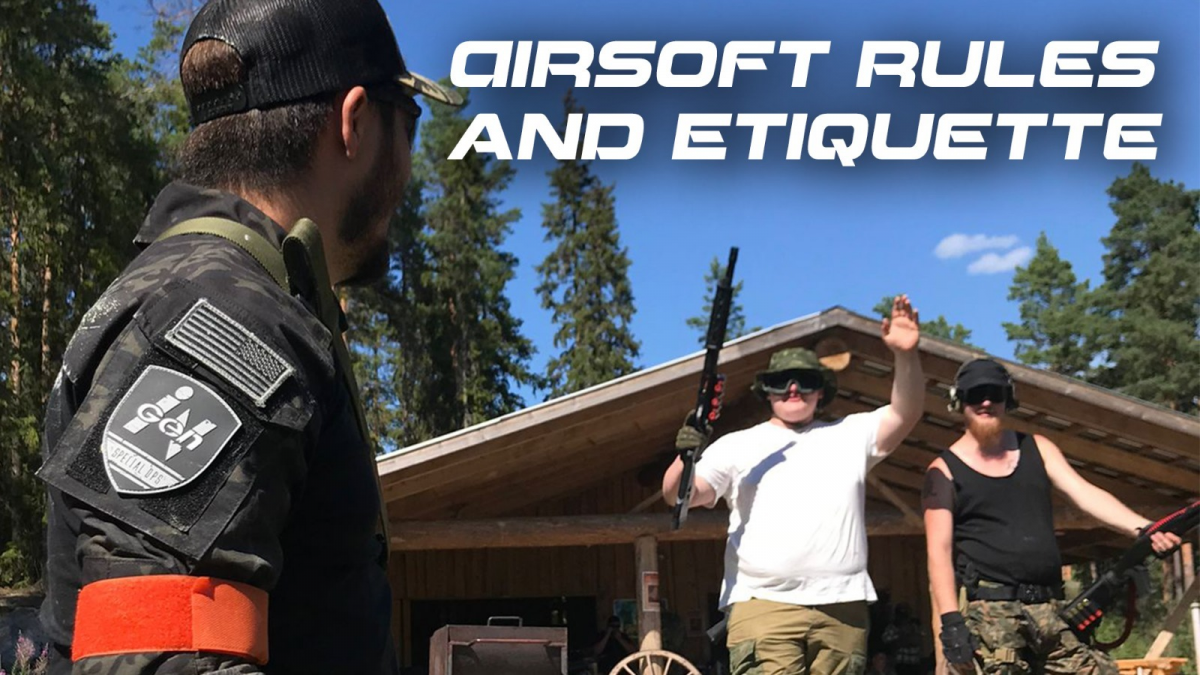 Like so many things in life, airsoft has rules! Contrary to popular belief, we don't go out and randomly shoot our friends. Actually, it's quite the opposite! Depending on the game modes and types of games we play, different rules will be in place. In the same vein, some rules are there for our enjoyment, while others are for safety. Moreover, since airsoft can be considered a sport do not forget proper etiquette.

Without getting into too many detailed rules, there are some basic rules we should keep in mind like calling your hits, not firing within the safe zone, and wearing the required safety equipment. Then, there are more specific rules that coincide with various game modes like holding a zone for a specified time or having to eliminate the other team to win. Knowing is half the battle!

Finally, being much like a sport, there's some etiquette that we must pay attention to. These are some unspoken rules that are a universal language when it comes to airsoft. Don't get angry over late hit calls, don't take hits personally, don't go out there on the field with the intent to hurt someone, these are all part of those "unspoken rules".

Previously we mentioned that there some basic rules. These rules are the same around the world as they work with the basic game types when we go and play airsoft. First, we shall start with the golden rule, always call your hits! Secondly, follow site rules that specify the allowed modes of fire like semi-auto only or fully auto. Third, FPS or power limits (every field and region has one). Finally, safety rules within the safe area, which are some of the most important rules to follow!

How Do Airsoft Players Know When They're Hit?

Going back to the golden rule, remember to always call your hits. But, how do you know when you are hit? When we play airsoft and have a BB fired at you and that BB hits any part of your body, you are "hit". In video game terms, you are dead and out of the game. Two of the most popular game modes in airsoft are "Team Death Match" and "Defending the Zone". These two game modes' success is highly dependent upon the following of the "hit" rule. To properly enjoy these modes, you must always call your hits, not to mention it's also in the spirit of good sportsmanship!

Once you are hit, you must make sure you call it out loud enough. Airsoft can be a very exhilarating sport where our adrenaline is pumping, but always be conscious of taking fire. Playing fair goes a long way as airsoft is based on the honor system.

What You Should NOT Do In Airsoft?

As aforementioned, airsoft is a sport based on the honor system. It's absolutely important that we all play fair. With that said, I will repeat, remember to call your hits! Calling your hits is the cornerstone of airsoft gameplay. For any of the mentioned game modes to succeed, you need to call your hits! Secondly, do not over shoot! Overshooting is continually firing at someone even after calling a hit. This is very unsportsmanlike behavior and can even injure people! No matter what you are feeling, always look out for others. Thirdly, never go out of bounds. Airsoft fields are set up a certain way for many reasons. Going out of bounds can not only be dangerous for you, but could be a liability for the field! Finally, do not fire your airsoft gun in the safe or resting area. This final point is probably the most important.

Game etiquette revolves around the rules we mentioned. What I find often overlooked is general etiquette. Common sense and being kind to each other goes a long way. When it comes to airsoft game etiquette, you are going to need both!

Let's start by watching what we say to each other, try to refrain from using foul language or negative speech directed at a person or people. We are here to have fun and enjoy our time, let's be kind. While I understand that getting hit can hurt, try not to direct how you feel towards any one person. Getting hit is part of our game, getting cursed out is not.

During games, things can get heated! When communicating, be direct, be straightforward, and be patient. Meaning, do not speak down to people. Understand that some players might not understand things how we do. Thus, speaking direct and clear is always ideal.

The first thing you do before entering the safe / resting area should be to make sure your guns are unloaded. Always have your guns unloaded and on safe. This area should be a place where you can freely walk about and chat with players without fear of sudden injury! Secondly, try to take time to chat with players around you. In our hobby, we always love to talk about our guns and builds. Try to learn about someone else's build and loadout. Do not judge or look down on other players. We all love and enjoy airsoft in our own way. We do not need to mock or belittle others for liking what they like.

As mentioned, there are some basic game modes. Two of these are "Team Death Match" and "Defending the Zone". These are two of the most popular modes found at all airsoft fields, ideal for beginners and veterans alike. The rules are simple, and often times allow veteran airsofters chances to guide many first-time players!

For those who play FPS (First Person Shooter) video games, this mode is very typical. In TDM (Team Death Match), one team goes against another in a battle to the "death". It will usually be two teams of equal numbers going force on force eliminating the other side until there are no opposing players left. TDM is a fun, high-speed, exciting game type ideal for indoor arenas!

There are two popular rules used for TDM, respawning or elimination. If respawning is allowed in TDM, two things will happen. Each player will be given a specified number of respawns. They must go back to a respawn zone/point upon getting hit. After each team has exhausted their number of respawns per player, that team will lose and the team with the most players still active will win.

Another scenario would be each team having an unlimited amount of respawns but you play to a time limit. For this kind of TDM, respawn points are usually further apart, allowing for more time needed to get back into the fight. There isn't always necessarily a winner here but is a great game mode to get players warmed up for a day of playing airsoft.

This game type goes by many names but the objective is always the same. You will be split into two factions, one attacking and one defending. The attacking team usually will be a larger force with some "respawns". The defending team will be a smaller force with better defenses. The better defenses will balance out the lower number of defenders. The key objective is to survive to or beyond a given time. The attackers' objective will be to eliminate all defenders. Zone defending games always test communication and the ability to hit your targets. Therefore, this game type is best suited for large outdoor fields!

Defending the zone is a very team-based game mode and in such, the rules usually revolve around holding or finding an objective within a given time. Starting with the defenders, your rules are simple: hold the zone to avoid it from being captured. For the attackers, you want to drive out the defenders from their zone by eliminating them within a given time frame.

Other rules include finding an objective. This allows your defenders a limited amount of respawns at a further location IF the attackers eliminate them. The attackers then essentially become the defenders as they need to hold the objective captured while the defenders go back on the offensive trying to "liberate" their captured objective.

Rules and etiquette in airsoft are nothing crazy. Many times it's just common sense and trying to be kind. Our end goal is to grow our hobby and have fun. Therefore, sometimes being a good ambassador for our sport means more than just a cool gun or fancy camo. Playing by the rules can be fun! Showing proper etiquette helps give our sport a welcoming image. Let's do our part!.

Categories: About Airsoft
Posted By: Mark Anderson
Primary
Search
Latest Posts
Categories
About This Site
This may be a good place to introduce yourself and your site or include some credits.
Find Us
Address 123 Main Street New York, NY 10001 Hours Monday–Friday: 9:00AM–5:00PM Saturday & Sunday: 11:00AM–3:00PM