What FPS is Good for Airsoft?

If you are new to the hobby and have heard or seen these three letters being tossed around, and you aren’t sure as to what it means, well then. Buckle up as you’ve just come across one of the most important acronyms in the world of Airsoft. So before we answer what FPS is good for airsoft, let's talk about those three letters.

FPS is so significant that it governs the rules within the sport, the gameplay of which a referee chooses to run. Most importantly, your style of play. Run in head first, assault on all fronts, or take a more cautious approach, doing reconnaissance as the ever-so-popular Sniper. But before we get into how it is so influential, we must answer a very important question to our newcomers.

To put it simply, FPS stands for ‘feet per second’. Used as a means of measuring the muzzle velocity of a BB (6mm pellets) as it leaves the barrel of an Airsoft replica. It can be measured by using a chronograph.

Some countries measure velocity using "meters per second", or m/s. Converting FPS to m/s is simply dividing by 3.3. So 330fps equals 100m/s. But internationally, all airsoft players universally understand FPS.

There are many variables as to how the FPS can change, such as the weight of the BB itself.  So when one talks about FPS, they are mainly referring to the use of 0.20 gram BBs. For example, a lighter BB of 0.12g (very rare to find these days and mostly used on very low cost and low power Airsoft guns) travels a lot faster than a heavier one of 0.3g BBs so long as the propellant is unchanged.

What Does FPS Affect?

There are a lot of aspects to which FPS can affect but it really boils down to three aspects. Power, range and accuracy. To answer what FPS is good for airsoft, we are going to use the idea of ‘throwing a ball’. We'd like to believe you have all thrown at least 1 ball in your life. Whether we wanted to or was forced to in gym class.

Firstly and probably most importantly comes power. Imagine a target on a wall. The more force behind the throw, the faster the ball flies, the harder it hits its eventual target which is. The energy behind the ball dissipates the longer it spends in the air. The most energy you’ll be getting out of the ball is when it leaves your hand. That being said, we all know the saying when it comes to 'great power'. It also ties in nicely to our next point. 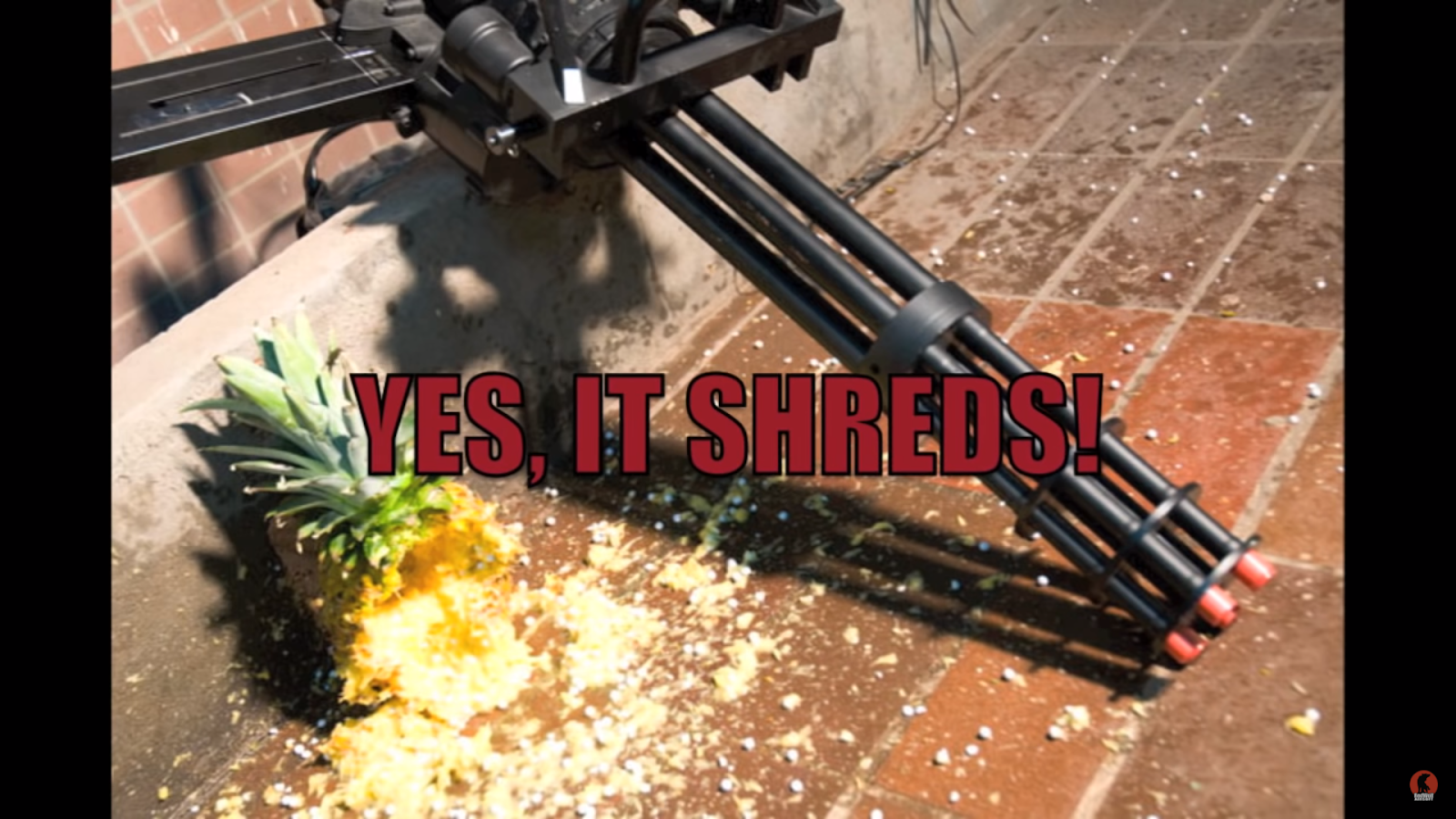 The next point being range. As mentioned before, the more force behind your throw, the faster. Also, the further the ball flies before gravity likes to chime in. Feebly throwing a ball will likely not go that far. Gravity will take hold of the ball very early on once the force behind the ball has dissipated. But if you summon your inner hulk strength to throw the ball with all your gloriously green might. You see where this is going.

Last but not least is accuracy. Accuracy is a finicky aspect to cover mainly because there are so many factors that tie in but here’s the T.L.D.R. version. The harder you throw, the faster the ball goes, the more likely it’ll go where you want it to before external factors such as wind and gravity affect its final destination.

A lighter ball will more likely be affected by external factors like wind than a heavier one, but also won’t need as much force behind the ball. But a heavy ball will need more force in hopes to reach its target despite external factors not affecting it as much.

What is the ideal FPS for Airsoft?

This is where things get interesting, almost controversial. The weird thing is, there is no real right answer as every field around the world has their own set of rules when it comes to FPS limitations. Nevertheless, there is a general rule of thumb one does follow. Here’s an example of a field I play at nearly every weekend. *Courtesy of https://www.pantherpaintball.com/fps-limits/*

This image taken from a Canadian Airsoft field called Panther Airsoft. Canadian import laws require that Airsoft replicas imported into Canada have to clock in between 366 to 550 fps. So let us take that into account.

On this particular outdoor field, what they deem ideal really comes down to your style of play and this can be categorized into three play styles. In the first category, you’ll find the most common play style. Anything not considered a DMR (designated marksman rifle) or a sniper rifle, so long as the replica clocks in between 366 and 420 fps, you’re in the clear. DMRs must clock in between 420 and 450 fps. And the ever so 'rare' sniper user, anything over 480, but under 550 fps, is considered ideal. Just take into account that there is a minimum engagement distance for all three play styles as injuries could occur if you’re not careful.

However, the numbers change every so slightly when you’re playing in a much smaller indoor field and as mentioned before, numbers vary from field to field. While indoors, there is only so far you can shoot and there are moments where you can walk right up to the opposing team so it is good to be sensible when it comes to the fps of your main and sidearm. Shooting a target from up close with a high powered replica is never fun. It is also a great way to not make any friends.

A way to avoid any altercations is to keep the fps of your replica at a reasonable level. 300 fps for a sidearm as pistols are only ever used as backup unless you’re using them as your main. In which case, 300 is still all you need. As for the main, keep the fps between 330 and 360 fps as to prevent injury to other players. Whether your target is either 2 meters or 20 meters away, you’re still going to hit your target. Here’s hoping you’re a good shot.

Is a Higher FPS Always Better?

It depends on your intent. The only viable reason why one would want to increase the fps is to cover more ground, especially for DMR and sniper rifle users. Nonetheless, if you want to play well with your fellow Airsofters, it’s best to keep the fps at a mid-range level as mentioned previously.

What FPS causes damage to the skin?

There is no denying that whatever fps you use, it’s going to hurt a little bit. Whether it’s a very short distance like shooting your foot with a lower fps pistol with a lighter weight BB (trust me, it has been done by yours truly), or being hit by a sniper from a distance with a higher fps and a heavier BB, you’re going to feel it.

On that note, the RedWolf Airsoft YouTube channel has an old yet hilarious video showcasing the difference between BB weight and fps and how much damage it causes to your body. You can watch this video here:

Worried about how much it’ll hurt? Don’t be, as there are many ways to help mitigate the pain. One way of doing so is by adding layers of clothing. A layer or two helps wonders as it acts as a shock absorber when BBs impact the clothes and RedWolf has a vast array of tactical uniforms and protective vests to choose from.

How much a BB hit hurts depends on ENERGY of the BB, measured in Joules (J), and is a combination of FPS and the weight of the BB. The higher the energy, the more it will hurt. The formula for calculating energy is shown below.

So to answer What FPS is Good for Airsoft? You have to think on a larger scale. There are many aspects one has to consider when purchasing their first or next replica and their playstyle has a lot to do with it. You also have to consider what you want to run as your main and sidearm, the right weight BBs, potential upgrades and the rules and regulations of the field you play at, or any restrictions at the events you attend.

I leave you with this. There are those who try to push the limit when it comes to achieving the highest fps their replicas can handle but it comes with a cost. Sticking to the ‘ball throwing analogy’, if you keep on throwing a ball as hard as you can for an extended period of time, it is likely you may throw your shoulder out, pun intended. So, do be wary of how far your replica goes as it could throw it’s metaphorical shoulder out and replacement parts for small broken pieces can be relatively difficult to come by. Thankfully, chances are we have them!

Categories: How To Guides
Posted By: Tim Selby
Primary
Search
Latest Posts
Categories
My Wish List
Last Added Items
Go to Wish List
You have no items in your wish list.