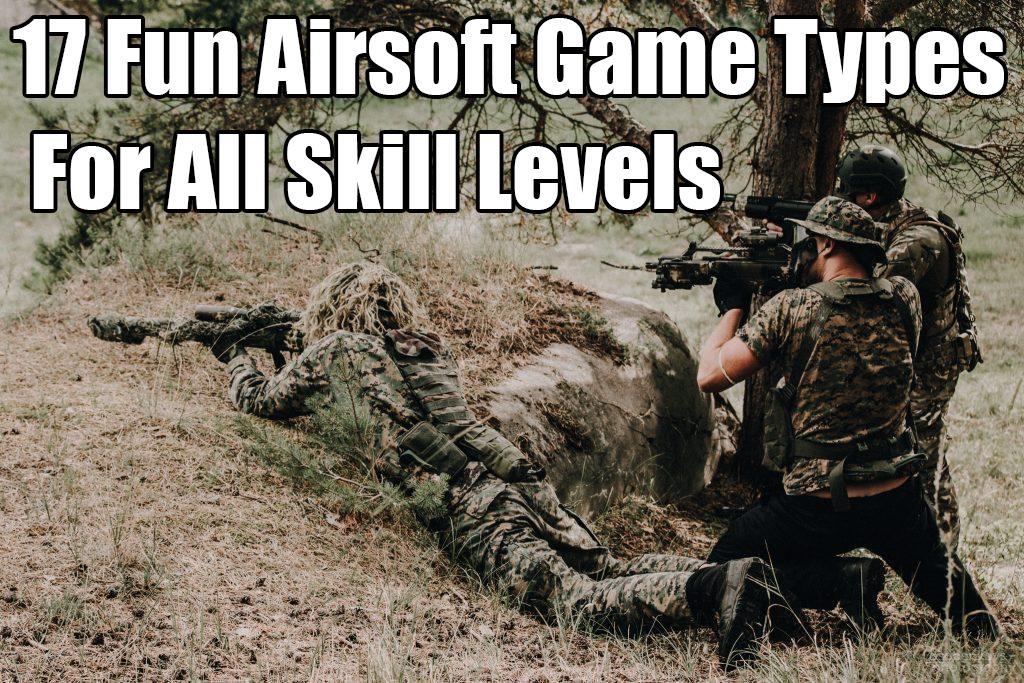 If you’re not familiar with airsoft, you may be under the impression that the only objective of an airsoft war is to shoot players on the other team. However, there are actually many different game modes with a variety of objectives. In this post, we will explore 17 fun and creative game types that you can try out with your friends and teams.

For the majority of these games, each team should have 4-6 players, with different roles and varying weapons. Every game will have a respawn point for players that are hit, but not all game types will have a respawn point. The team that's defending a fortress, for example, doesn't need players to push forward. Whereas the assault team can go without a sniper, making sure the rear end of the team is covered. The majority of teams consist of riflemen, support gunners, one or two DMs (designated marksmen), or sniper.

In no particular order here's what we consider are the top 17 airsoft games that are popular among the airsoft community:

Perfect and simple game for beginners learning the ropes of what and how airsoft is. Players are usually split into 2 teams, when you get hit you return to the respawn point which is also known as the team starting point. Simply the team with the most number of kills wins.

Very similar to Team Deathmatch except it's free for all. When hit you return to spawn point, the player with the most number of kills wins. Simple and fun game for all skill levels of airsofters.

This popular game is exciting as well as very fun! No matter what type of airsoft gun or airsoft gear equipped, it will work as it depends on the strategy deployed. Before the game begins one president or VIP is selected. In the beginning, half of the players are the president’s bodyguards, and the remaining are assassins. To win, the president has to reach the specified safe location without being hurt. If the assassins want to win they need to kill the president successfully before he or she reaches the safe zone. The objectives are simple but require a great amount of strategy to win.

The idea of this game is very similar to the bomb and based on the video game Counter-Strike. Except there's no bomb and one team has to find hostages being held by the opposing team. Once found they have to bring them to a safe point to win or defeating all of the opposing team. So in a way it is similar to team deathmatch but with the element of saving hostages. In most variations of this game, hostages can be given a pistol to use by the team saving them.

Capture the Flag is a tactical game that's popular yet very simple to play. Players are split up into 2 teams with each team having a home base. The home base for each team is where that team's flag is placed. It's best to use two different colored flags to differentiate the teams. To win the objective is simple, get the opposing team's flag back to your base without being hit.

This airsoft game can be played with small or large groups of airsofters. We recommend dividing the team into a 4:1 ratio of humans to zombies. The zombie role has to infect the humans without being shot more than 3 times. If a human is attacked by the zombie they also become a zombie, decreasing the number of humans.

The task for humans is to find cure items prior to getting infected so they do not become infected. For either team to win they need to eliminate the opposing team whether that means infecting all humans or wiping out all the zombies. Many that play this game prefer to limit it to airsoft pistols only to make it more challenging.

This airsoft game is like hide and seek, a single-player for every 10 players is a sniper who is equipped with an airsoft sniper rifle. Before the game begins, the sniper has two minutes to hide before the opposing team can begin searching for him or her. The sniper should find a good hiding spot where they can try to pick off the opposing team without being spotted. As the sniper can move around to different hiding spots this can make it challenging for the other team. When the sniper is shot, he is escorted back to a safe checkpoint, they can run at any time before reaching the safety checkpoint, or upon arrival. But if the sniper is shot again, they lose the game. The sniper has to eliminate the opposing team before he is eliminated.

This game usually consists of two teams, one being guards and the other prisoners. Prisoners are only allowed to have airsoft pistols, but the guards can use anything they like. For the prisoners to win they need to escape and get to the chosen safe space. But for the guards to win, they'll find and eliminate all the prisoners before they arrive at the safe zone.

Very much like a military simulation, which makes this game popular for training purposes as well as for fun. A team of four portray as the Special Forces, whereas another group of eight people poses as the Enemy Team. All weapons can be used, even airsoft grenades are allowed. To win, you just have to kill off the opposing team, simple right? Since the enemy will always have twice as many people as the special forces, they have an advantage. Thus having a good strategy is important for the special forces.

This type of game requires two teams with an equal number of players. Within each team, there needs to be one medic for every 10-15 people. The medic has the ability to revive a teammate that has been shot. This is a tough role for the medic not to get hit, so they'll need backup. To win is simple, wipe out the other team before they do the same to you.

For this game, players are divided into four teams, e.g Red, Blue, Fire, Earth. There are six different positions to be captured by changing a flag to the color of your team. The idea is to capture all six positions in a set amount of time, most do it within 30 to 60 minutes. Once a player is hit, they return to a position that is under their team's control. As well as waiting for 5 minutes before re-entering the game! The game ends when all posts are captured or the timer ends. When the time expires then the team with the most positions claimed wins.

This game consists of two teams, a hunter team and a team of prey. The objective is simple, hunters are to eliminate the prey before they can make it to a safe location. Hunters win if they can stop the prey from making it to their home base. If the prey reaches the safe zone they win the game.

A single Juggernaut per 15 defenders is armed with the wide range of weapons in the arsenal, including full-auto Gatling guns, and has to make it from Point A to Point B. The juggernaut cannot run, but a fast walk is ok! Though the Juggernaut has no re-spawn point, they'll have balloons tied to them (the number of balloons usually equal to the number of defenders). If all the balloons are popped, the Juggernaut loses.

One man aka Rambo versus 10 - 30 players in this epic team deathmatch, not for the faint-hearted as it will require a lot of skill and tactics from the one chosen to be Rambo. Everyone in this game will have one life!

For more cool products and airsoft replicas be sure to check out our website.

Categories: How To Guides & About Airsoft
Posted By: Quake
Primary
Search
Latest Posts
Categories
About This Site
This may be a good place to introduce yourself and your site or include some credits.
Find Us
Address 123 Main Street New York, NY 10001 Hours Monday–Friday: 9:00AM–5:00PM Saturday & Sunday: 11:00AM–3:00PM