How Does an Airsoft Tracer Unit Work? 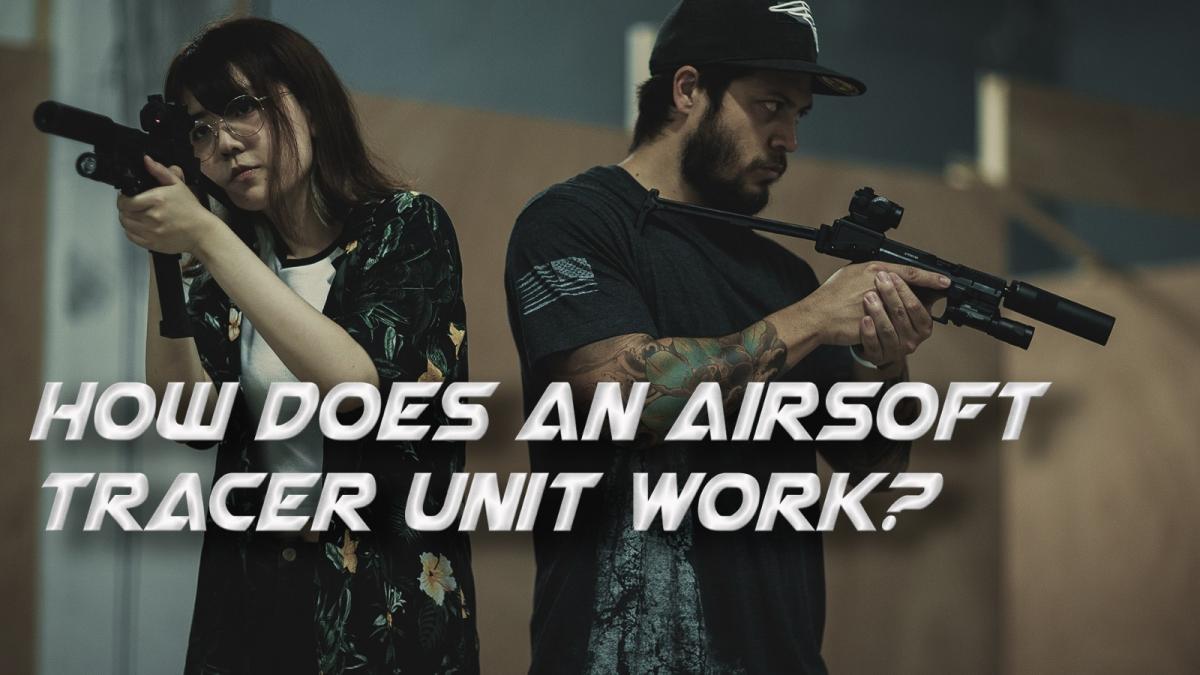 Ever since WWI, militaries across the world have utilized tracer rounds in order to track the in-flight path of fired rounds and improve accuracy. In airsoft, tracer units accomplish these same purposes by lighting up each BB that is fired so that its flight path is visible. An airsoft tracer unit can be especially beneficial in low-light or no-light conditions when seeing where your BBs are going would otherwise be impossible.

What is a Tracer Unit?

A tracer unit is a component that typically attaches to the end of an airsoft gun's barrel. The most used versions are screwed onto the barrel tip by using a set of threads. There are several sizes and threads ranging from 14mm counterclockwise (CCW) all the way up to 24mm clockwise (CW).  Once it is attached, a tracer unit ends up looking a lot like a suppressor, which is great for milsim players who like to keep their guns looking as realistic as possible. Rather than suppressing the gun's report, though, tracer units work to illuminate each BB that is fired so that the BB's flight path is traceable in low-light conditions.

It is worth mentioning here that tracer units require a specialized kind of airsoft tracer ammo known as tracer BBs in order to achieve the desired effect, and these glow-in-the-dark airsoft BBs are a little more expensive than traditional BBs.  They also come in various weights, although they will not exceed 0.3g compared to regular BBs.  Tracer BBs also come in different colors.  For night games, though, the advantages that tracer units and tracer BBs provide are too considerable to ignore.

An additional benefit of using tracer units and tracer BBs is that it makes adjusting your scope or red dot easier. Due to you being able to see the flight path of your BBs easier, it will drastically reduce the time needed to make sure your optics are zeroed in. You can learn more on how to adjust your scope by checking out the article we wrote.

How Does it Work?

What makes tracer BBs special is the fact that they are coated in phosphor. If you've ever played with glow-in-the-dark toys as a child or painted with glow-in-the-dark paint, then you are already familiar with the effect that phosphor coating provides. In order to glow brightly enough to be easily visible, though, this phosphor coating needs to be "charged". This is where the airsoft tracer unit comes in.

When a tracer BB passes out the barrel of the gun and through the attached tracer unit, it is exposed to a row of ultraviolet lights that charge the BBs phosphor coating and cause it to glow brightly the moment it exits the barrel. Most tracer units are powered by AA batteries, though some units feature a built-in battery that can be recharged using an AC charger.  A sensor detects the BB entering the tracer unit, and the light is activated in a quick flash, almost like the flashbulb of a camera.  The light is intense enough so that the phosphor in the tracer BB absorbs sufficient energy to become luminous as the BB leaves the tracer unit.

Why Use a Tracer

Tracer BBs offer the same benefits to airsoft players that real tracer rounds offer to actual military forces. In fact, one could argue that tracer BBs are even more advantageous for airsoft than their real-life counterpart is for real soldiers. With a real steel firearm, you can be fairly confident that bullets will follow a relatively straight and predictable path unless you are shooting at extreme ranges. With airsoft guns, though, this isn't always the case; and visually tracking the BB's flight path is the most effective way for airsoft players to adjust their aim and take more accurate shots. But be forewarned:  if you can see the tracer BB, that means your opponent can clearly see your position as well.  In the daytime, tracking the flight of an airsoft BB is fairly easy. In low-light conditions, however, using a tracer unit and tracer BBs is the only way to maintain this ability.

Of course, there are other options for nighttime gameplay. Infrared or night vision optics is one such option that comes to mind, but most airsoft players don't have the budget for these products given that even lower-end night vision optics can cost several thousand dollars.

Attaching a flashlight to your gun is another option worth considering if you are attending a nighttime event. However, having an attached flashlight doesn't completely negate the need for tracer rounds. For one, the light from an attached flashlight probably isn't going to be enough to illuminate BBs mid-flight, especially at longer ranges. This means that tracking where your BBs are landing is still going to be a challenge. Second, keeping your flashlight on all the time or turning it on at the wrong time can sometimes be a tactical blunder. There's no better way to let every enemy player on the field know where you are than having a bright, shining beacon attached to your gun.

While flashlights can certainly offer an advantage in certain scenarios, they can't fully replace the role of tracer BBs in nighttime engagements. Instead, equipping your gun with both a flashlight and a tracer unit is the best way to ensure that you are fully outfitted for low-light warfare.

Do Airsoft Tracer Units Work in the Day?

Tracer units will function the same in the daytime as they do at night, but any benefit that they provide is severely diminished when the sun is shining. While you may be able to slightly notice the extra glow on your BBs if you are using a tracer unit in the daytime, it isn't really going to make your BBs any more noticeable or trackable than they otherwise would be. In this vein, while not as effective as in low-light, they also work and have a similar effect in well-lit rooms or indoor arenas. Since tracer BBs are more expensive than even the best BBs that aren't phosphor-coated and since tracer units are incredibly easy to put on and take off your gun, you are better off leaving your tracer unit at home for daytime events and using cheaper, traditional BBs instead. Alternatively, many of the newer tracer units have on and off switches, allowing you to just keep them on your airsoft gun if you choose to do so.

At RedWolf Airsoft, we are proud to offer high-quality tracer units, tracer BBs, and everything else you need to give yourself a competitive edge on the nighttime battlefield. If you would like to get started enjoying the benefits of tracer BBs — as well as the thrill of seeing your BBs fly out of your airsoft gun like laser beams — here are a few great tracer units that we highly recommend:

While most tracer units attach to the end of the gun's barrel, the Modify Bhive 150rds Tracer Magazine allows you to charge your tracer BBs while they are stored in the magazine. Having a tracer unit inside of your gun's magazine negates the need for an additional, barrel-mounted unit, making this product a great option for anyone who wants to limit the number of weighty accessories on their gun or anyone who doesn't find the aesthetics of a barrel-mounted tracer unit appealing.

The Angry Gun ROTEX V Compact Tracer Unit offers a number of impressive features, including a quick-detach design, a full-metal construction, and rechargeable batteries with an included charging cable. If you are looking for a durable, well-rounded, and high-performing tracer unit then this unit is a great choice to consider. The actual "tracer unit" itself is housed in this fully licensed body from B&T making it ideal for milsim players!

In addition to illuminating tracer BBs, the WoSport KX3 Spitfire Tracer and Flame Effect Unit also offers a front-flashing ability that mimics the effect of muzzle flash. This effect creates an incredibly realistic shooting experience that is sure to make your nighttime airsoft battles all the more immersive. While this unit works with all platforms, it's ideal when paired with gas airsoft guns. When used with gas pistols or rifles, the front flash will illuminate the expelled gases making the muzzle flash effect more pronounced and realistic!

Categories: How To Guides
Posted By: Mark Anderson
Primary
Search
Latest Posts
Categories
About This Site
This may be a good place to introduce yourself and your site or include some credits.
Find Us
Address 123 Main Street New York, NY 10001 Hours Monday–Friday: 9:00AM–5:00PM Saturday & Sunday: 11:00AM–3:00PM
My Wish List
Last Added Items
Go to Wish List
You have no items in your wish list.