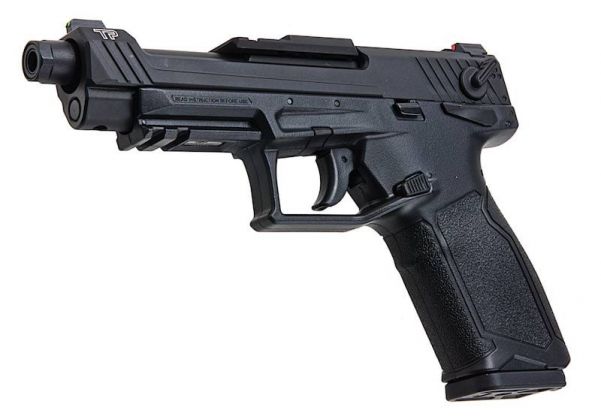 TTI-PS-TP22-BK
Be the first to review this product
In Stock.
Out of Stock.
SKU
TTI-PS-TP22-BK
Email me when back in stock.
SHIPS IMMEDIATELY
DESCRIPTION

The TP22 is TTI Airsoft, not Taran Tactical but Titanium Tactical Industries' first-ever gas blowback airsoft pistol. This pistol, at first glance, seems like a hybrid child of every popular pistol platform out there, with some resemblance to models such as the M9, M&P, USP, and even a PPQ, but all this is not why this pistol is special.

Externally, the pistol features a 14mm CCW threaded barrel for all the muzzle attachments such as tracers and suppressors, an RMR optics plate for red dot solutions, and Picatinny under rails for different accessories such as a flashlight or laser, all this makes this pistol quite modular. Let's say, having a red dot on your airsoft pistol is not your thing, this pistol also has fiber optic iron sights.

Adding to the modularity, this TP22 uses magazines that are also compatible with Tokyo Marui G17 spec magazines as well as Umarex (VFC) Glock 17 spec magazines, allowing users to easily find spare magazines if they didn't already own them.

The TP22 is also quite ambidextrous as the safety and slide release is ambidextrous and the magazine release button could be switched to either side. This pistol is select fire, and just like a Glock 18c, it could fire in both semi and automatic by flipping the selector switch located on the left, close to the rear of the slide.