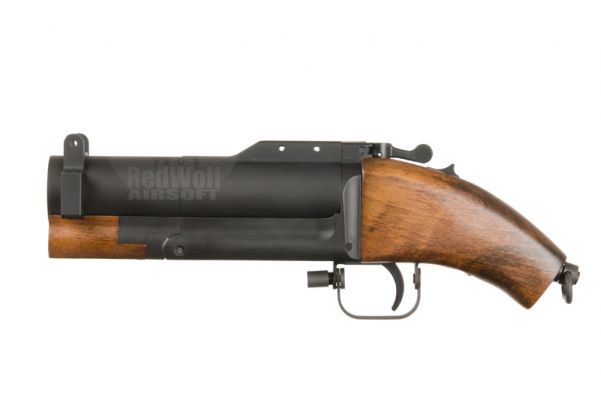 KA-CART-04-S
Be the first to review this product 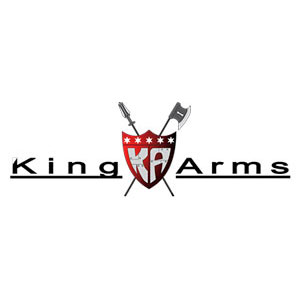 In Stock.
Out of Stock.
SKU
KA-CART-04-S
Email me when back in stock.
A miniture M79 40m launcher, carry it as a back-up force multilpier or rock it off hand like some sort of psychotic pirate with a penchant for extreme calibers.
SHIPS IMMEDIATELY
DESCRIPTION
Clearly modeled after the classic M79 40mm grenade launcher, this so called sawed-off version is infact a total redesign aiming to closely emulate the full size version but nipped and tucked all over to reduce size and weight. At a little of 33cm and weighing in at around 1080g, is has the proportions of a large pistol.

Compatible with standard Airsoft 40mm Moscart BB shower shell grenades, this weapon is a compact delivery system for your 40mm ammo of choice to work as an effective force multiplier secondary weapon when a full size launcher would otherwise be unwanted for its bulk.

The rear of the weapon is carved stubby and exact, just enough to grip onto your weapon like a sawn off shotgun poised like an old world flintlock pistol (albeit of massive caliber). Simplistic, the weapons only interface functions are the trigger, breach lock and safety tab; otherwise the only other moving parts are the internal assembly, breech buffer and adjustable trigger guard (swings left / right). The launcher is a rock solid piece free of wobble, its mixture of metal and wood giving it the charm of a real character. Check out our website for grenade types, Madbull in particular have a vast array of high quality grenade types in 6mm and 8mm in various pellet counts as well as foam rocket and rubber slug version all propelled by HFC, TOP or CO2 gas for a wide range of applications. Use the shower shell for the high count 6mm for buckshot effect to clear rooms, use the 8mm low count shell to clear corridors or even use slugshot for stubborn or special targets.

This launcher comes with a quick detach sling mount which attaches to the quick detach anchor on the base of the grip allowing this to be bungee / single point sling carried besides the alternative options of sticking it in a pouch or just carrying it in the off hand like some kind of psychotic pirate.
Specifications
Reviews
Write Your Own Review
Q&A
Customer Questions
No Questions
Please, mind that only logged in users can submit questions