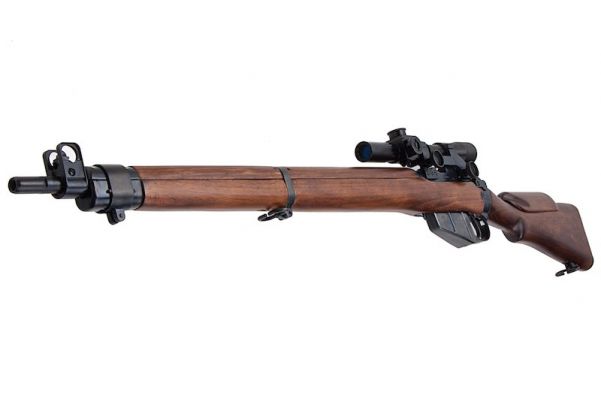 CLA-005
Be the first to review this product
In Stock.
Out of Stock.
Only 2 left
SKU
CLA-005
SHIPS IMMEDIATELY
DESCRIPTION

The Legendary Lee Enfield Rifle is a bolt action, magazine fed rifle that has served the British Empire and its Commonwealth during the first half of the 20th century, and the British Army has adopted different variants of this gun from 1895 to 1957. The No.4 MK1 variant was adopted during the beginning of World War II in 1941 as it was stronger yet easier to mass-produce compare to the previous SMLE or Short Magazine, Lee Enfield variants. There was a scope version known as the Lee Enfield No.4 MK 1 (T) and has to pass an accuracy requirement by placing 7 out of 7 shots in a 5 inch grouping at a range of 200 yards.

The?ARES Lee Enfield NO 4 MK1 Sniper is?faithful replica of this designated sniper rifle. Not only that the gun's metal parts are 95% made of stainless steel, it also has a really nice High-quality?wood stock giving it a very rugged feel, the feel of a true battle rifle. Much like the real steel gun, the ARES?Lee Enfield NO 4 MK1?also features a smooth action, something this gun was well known for. This particular version features a scope right from the factory, just like the real one.

Unlike most ARES spring bolt action guns, the Lee Enfield?features a direct BB feeding system, similar to the Amoeba STRIKER series to make even the internal action much more realistic. The gun comes with a 35 round magazine, and the whole package will come neatly in a hard plastic gun case. If you are looking for a rifle for WW2 reenactments, cosplay or even a really nice wall hanger, this gun is the perfect rifle to do so.