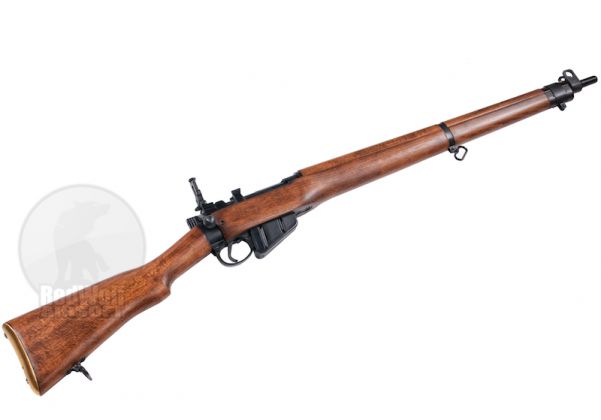 KTW-4571383520912
Be the first to review this product
In Stock.
Out of Stock.
SKU
KTW-4571383520912
Email me when back in stock.
A redesign of the Lee-Metford which had been adopted by the British Army in 1888, the Lee-Enfield superseded the earlier Martini-Henry, Martini-Enfield, and Lee-Metford rifles.
SHIPS IMMEDIATELY
DESCRIPTION
Real Gun story:
The Lee-Enfield bolt-action, magazine-fed, repeating rifle was the main firearm used by the military forces of the British Empire and Commonwealth during the first half of the 20th century. It was the British Army's standard rifle from its official adoption in 1895 until 1957.

A redesign of the Lee-Metford which had been adopted by the British Army in 1888, the Lee-Enfield superseded the earlier Martini-Henry, Martini-Enfield, and Lee-Metford rifles. It featured a ten-round box magazine which was loaded with the .303 British cartridge manually from the top, either one round at a time or by means of five-round chargers.

The Lee-Enfield was the standard issue weapon to rifle companies of the British Army and other Commonwealth nations in both the First and Second World Wars (these Commonwealth nations included Canada, Australia and South Africa, among others).[5] Although officially replaced in the UK with the L1A1 SLR in 1957, it remained in widespread British service until the early 1960s and the 7.62 mm L42 sniper variant remained in service until the 1990s.

As a standard-issue infantry rifle, it is still found in service in the armed forces of some Commonwealth nations,[6] notably with the Indian Police, which makes it the longest-serving military bolt-action rifle still in official service.

The Canadian Rangers military service is still issued Enfield 4 rifles as of 2011, with plans announced to replace the weapons in 2014.[8] Total production of all Lee-Enfields is estimated at over 17 million rifles.