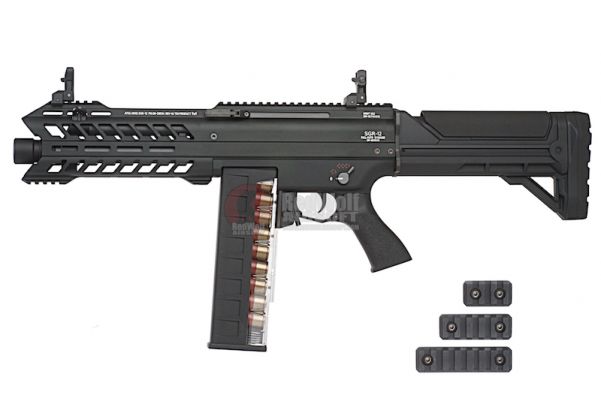 Tokyo Marui is known for innovation and pushing the limits, and boy they sure know how to do that! It's the moster, bigger brother to the AA-12 Automatic Electric Shotgun (AES) in the world with 3 inner barrels. Each inner barrel can be individually adjusted by sliding open the ejection port cover. From there this allows you to control the spread of how the BBs come out. Inside the gun it features a 3 Cylinder Mechabox which drives 30 BBs out a second in Full Auto! This gun is not as light as it looks; it weighs a little over 4 Kg which is quite heavy for those that are not used to M4 or AK system. The metallic finish on the upper receiver and handguard is beautiful and makes it feel as if you were holding the version from the actual game. It looks pristine and untouched, that will all change once you buy it and take it the field. Everything inside is newly designed, including the motor. If you look at the front sight and rear butt stock you can find a sling mount which is a great addition! Since it's a Marui product you can expect it to shoot at 260 FPS and accurately straight out of the box. We only recommend you using an 8.4V battery if you want higher rate of fire, careful though it will eat through you 90 Round mag in 3 seconds! Shooting it in full auto feels amazing, it's a force to reckon with against your opposition.

Tokyo Marui Co. Ltd is an airsoft gun and toy cars manufacturer located in Adachi, Tokyo, Japan that produced the AEG. The guns are principally sold in Japan, but are also sold worldwide. They were the first company to produce airsoft guns powered solely by electric-motor driven air compressors, which they called "Automatic Electric Gun" (AEG) in 1992. This compact air compressing system was implemented in their first battery-powered automatic firing replica, the FAMAS F1. Other airsoft guns were then introduced. The AEG system is still in use, and has been copied numerous times through the years by many other airsoft gun manufacturers.