The store will not work correctly in the case when cookies are disabled.
Share:
See other products from WE
Special Price $105.90 Regular Price $118.99
Save 11%
Price
Add to Wish List
Remove from my
wish list
Add to Wish List
Skip to the end of the images gallery 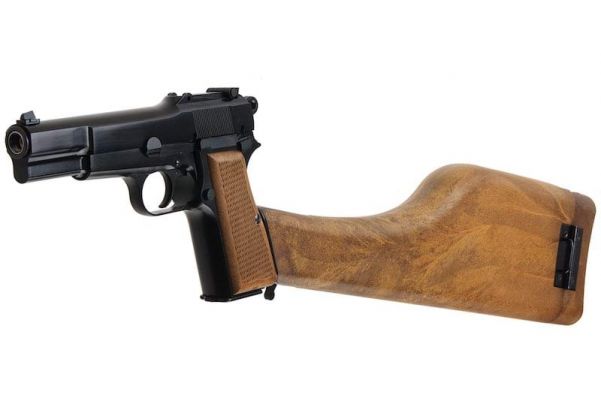 GUNT0998
Be the first to review this product
See other products from WE
In Stock.
Out of Stock.
SKU
GUNT0998
Email me when back in stock.
SHIPS IMMEDIATELY
DESCRIPTION

The WE New Browning Hi Power MK1 is based on the pistol that was used on all sides of World War II. The Hi-Power pistol is probably the world's first popular "wonder 9" as it has a double stack magazine and most Hi-Powers are chambered in the 9mm Luger round but were introduced far before the other more popular 9mm pistols such as the Glock 17, Barretta 92 or the SIG Sauer P226, as it was introduced in 1935, just before World War II. The Hi-Power was also one of legendary arms designer John Moses Browning's last designs as he passed away before the design of the Hi-Power was finalized and it was finished by his protege, Dieudonne Saive who later went on to design the Right Arm of the Free World, better known as the FAL.

This "new" WE Hi-Power is based on the "artillery version" of the Hi-Power family which features an optimistic rear leaf sight that could be adjusted for a ridiculous 1000 meter, which honestly is also pretty optimistic for an actual 9mm round. The gun is of course made of full metal except for the grips which are plastic. Moving on, this gun does come with a plastic stock that also doubles as a holster, similar to the WE M712 broom handle gas airsoft pistol.

Compatibility-wise, this gun features an internally threaded barrel that is designed to take 11mm CW threaded muzzle devices, which is quite interesting to have on a replica of an older pistol. The magazine found in this gun is the same as the one in the WE Hi-Power MK3 gas airsoft pistol, which means the magazine is cross-compatible.

Lastly, do note that this gas airsoft pistol behaves just the same as the real one, which means it has a magazine disconnect feature. This means unlike other pistols with an exposed hammer, such as 1911, the hammer does not drop without the magazine. To drop the hammer without accidentally firing the gun, you may have to either purge all gas from the magazine or insert the magazine partially before it clicks into place for you to be able to drop the hammer.