The store will not work correctly in the case when cookies are disabled.
Share:
See other products from Novritsch
Special Price $297.59 Regular Price $309.99
Save 4%
Price
Add to Wish List
Remove from my
wish list
Add to Wish List
Skip to the end of the images gallery 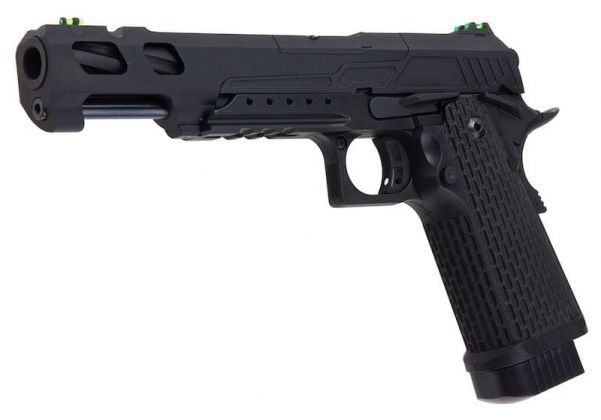 NOVH-SSP5-GBB
Be the first to review this product
See other products from Novritsch
In Stock.
Out of Stock.
SKU
NOVH-SSP5-GBB
SHIPS IMMEDIATELY
DESCRIPTION

Advertised as the airsoft pistol that can do it all, a sidearm that is not a secondary but a primary weapon. The SSP 5 is the latest Novritsch gas airsoft pistol may look like a tricked-out Hi-CAPA but it is not and it truly is a unique design from the ground up with a LOT of unique features that emphasize speed.

The exterior of the gun bares some similarities with the Hi-CAPA, 2011 and 1911 platform, as in the controls are more or less the same and you would expect them to be where they would normally be which would make it easier for novice airsoft players to get a hang off. The slide is made of CNC aluminum making it robust yet lightweight, actually, it is also possibly the lightest out-of-the-box Hi-CAPA style slide set because it only weighs 66 grams! It is also a split-side design, meaning when shooting, only the back half of the slide actually recoils, while the front half stays fixed and stationary, this gives the gun less to almost no recoil but at the same time allows for faster slide travel, allowing for accurate and fast follow-up shots.

Bright green fiber optics iron sights are a standard on this gun, allowing for quick target acquisitions, but if iron sights are not your forte, the SSP 5 is RMR red dot sight ready and it has probably the lowest mounting position out of any airsoft pistols on the market as it is located on where the chamber would normally be, this allows for a co-witness with the iron sights, also since the RMR would be mounted where the slide would not move, the RMR would be stationary when the gun is firing, allowing for even more accurate shooting. Speaking of accessory compatibility, this gun also features an internally threaded outer barrel which allows you to attach different muzzle devices such as tracers and compensators, since the barrel does not move, heavier muzzle devices will still work with this gun. Do note that you would have to get an adaptor to convert the threads to 14mm CCW, the adaptor is the same as the one used on the SSP-1. Of course, the gun also has Picatinny accessory rails, allowing you to mount all kinds of lights and lasers to your pistol.

On the frame of the gun, you will notice 5 drill holes, these holes are meant to work with the Novritsch Universal Holster system, which is a holster system that allows you to have a fully decked out SSP 5 with all the accessories you can think of but still be able to holster the gun on your hip.

On to the internals, just like any Novritsch gun, you would expect this to be upgraded out of the box, the SSP 5 is no different. The SSP 5 is designed to take heavier BBs, allowing you to push the effective range of the pistol, thanks to its 6.01mm precision inner barrel, this effectively allows you to "snipe" with your pistol, just like how any Novritsch airsoft gun should. Adding to the accuracy of this airsoft pistol is the fixed outer barrel that the gun has, an idea borrowed from the SSP18 and made better as the front half of the gun does not move when firing. On top of all of that, this pistol features a TDC-style hop-up and a one-piece chamber, giving you the ability to fine-tune the hop-up.

Novritsch's team designed the gun to last, which is why internal parts such as the sears, hammer, and hammer post are steel. The nozzle is a hybrid design, which is half polymer and half aluminum which makes it lightweight yet robust at the same time.

Novritch's team has also promised to release a bunch of accessories in the future, like a carbine kit for example for the airsoft pistol snipers out there and an HPA adapter for the speedsofters in mind, allowing for almost endless customizability.

The SSP 5 truly is a gun meant for all types of airsoft players, whether you are a speedsofter that requires a fast shooting pistol, a milsimer who wishes to stand out, or even an airsoft sniper who wants his sidearm to shoot further than most sidearms, the SSP 5 is built for all because it is not just an airsoft pistol, it is a platform in of itself.