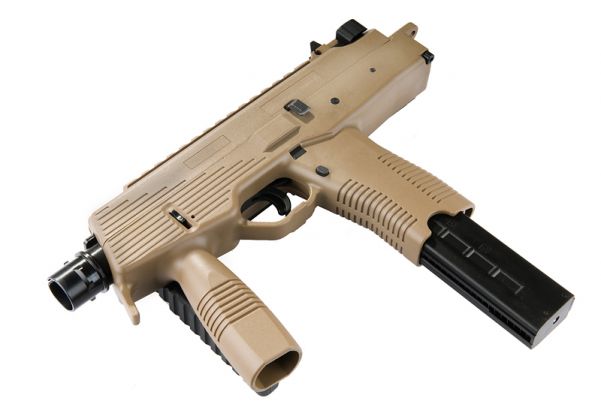 KSC-NP9-DE
Be the first to review this product
See other products from KSC
In Stock.
Out of Stock.
SKU
KSC-NP9-DE
Email me when back in stock.
SHIPS IMMEDIATELY
DESCRIPTION
The Brugger & Thomet MP9 real steel weapon is a revival of the now discontinued Steyr TMP. When Steyr decided to cease production of its TMP due to low sales and licensing problems, Brugger & Thomet (B&T) purchased the designed and began to produce a highly modified and improved version of the TMP, christened the B&T MP9. The new rendition of this venerated gun now sports a folding stock and integrated rails on the upper and right side of the receiver.

KSC took a hand at replicating the design in Airsoft form a while back and their recent Taiwan version is now offered with more variant options. It is the very same 350 fps 55 round magazine feeding Green / Top gas select fire submachine gun.

The NP9 has an integrated vertical grip where as the TP9 replaces the front grip with an additional accessory rail; both models have folding stocks and both come with 55 round long magazines. Both models are available in black, olive drab and dark earth colors.

The folding stock makes this one very short gun when folded at only 32cm and it is extremely lightweight fiber reinforced polymer construction makes this both a rock solid gun and maneuverable for CQB. The gun feels great to shoot and its moderate power means its great for indoor tight quarters skirmishes but superior to most pistols when engaging down longer corridors or across large rooms. The magazines high capacity of 55 BBs also means you will have an advantage over most pistol users.

The full length top rail and short right side rail add just enough accessory facets for rail-attach optics and a laser or flashlight unit. With built in iron sights you do not really need any accessories at all but the option is certainly there you want to make use of any.

The KSC Dummy Suppressor for TP9 quickly attaches and detaches and contains an inner barrel extension which bumps up the power to about 365-370 fps. For additional magazines, be sure to check those out to (KSC-NP9-MAG).

Compared to other gas blowback SMGs, the TP9 platform is mid powered and its rate of fire is also in the middle. The KWA gas MP7 is more powerful and very accurate but shoots slower than the TP9. The KSC M11 has a higher rate of fire then the TP9 but is less powerful and much less accurate. Out of the three, the TP9 offers the best compromise as well as the most variant options with and without front grips as well as color options.
Specifications
Reviews
Write Your Own Review
Q&A
Customer Questions
No Questions
Please, mind that only logged in users can submit questions