The store will not work correctly in the case when cookies are disabled.
Share:
See other products from Umarex
Special Price $422.99 Regular Price $469.99
Save 10%
Price
Add to Wish List
Remove from my
wish list
Add to Wish List
Skip to the end of the images gallery 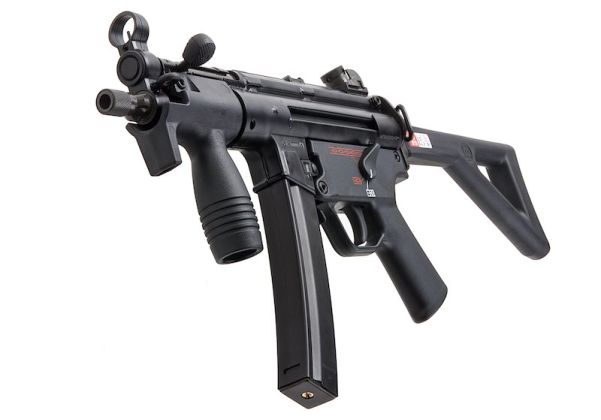 The MP5K was designed to be an even more compact version of the legendary MP5 submachine gun. The K version, just like its full-size counterparts, is highly sought after and highly prized weapons used by many around the world.

The particular version we have here is a fully licensed product and features all the corresponding markings. The lower receiver group is the same group adopted by the United States Navy SEALS. The lower features ambidextrous controls, steel magazine release lever, and its features the upgraded trigger group. The new group is a full set, quick replaceable fire control group with a newly designed disconnection set, hammer, and hammer latch. Its function and strip down are similar to the real steel counterpart.

The upper receiver group is exquisitely made with new steel stamping. The plate receiver of the MP5 is manufactured from stamped steel, with a welding process, just like the original. The classic handguard grip is just like the original, it features 1:1 cutting and sizing as well as appearance and texture. The charging handle, rear drum sight, front sling and rear sling swivel are all steel construction. The MP5K also uses a quick hop-up adjustment system much like the lastest Guide Hop technology for easy hop-up adjustment.

Internally, the MP5K boasts a new bolt group design with a built-in floating buffer with an enhanced nozzle assembly. The bolt carrier combines a steel heavy buffer and a two-stage recoil spring / steel recoil spring guide rod set for great recoil impulses. This design does not only improves the realistic shooting experience but also added durability. The bolt group parts are compatible with V1 and V2 bolt carriers)

The new re-designed chamber and bullet feed system is made from reinforced polymer material combing with a redesigned magazine makes the gun much more reliable. The new designed MP5 gas magazine includes a steel shell body with full markings. Inside it uses the new version floating gas outlet while still keeps the last round stopping feature. This new design is much more durable and highly increases the gas efficiency.

I’ve been wanting an airsoft mp5 for a while, and now that I have one, I’m not disappointed in the slightest. It feels nice to hold and to shoot, and the quality is exceptional, with its full metal construction (apart from the polymer grips.) I would highly recommend this for clearing rooms on airsoft fields or putting holes in targets. 10/10 from me! [RedWolf] We're glad you love it Zach! Just so you know, the real MP5K grips are actually polymer as well!