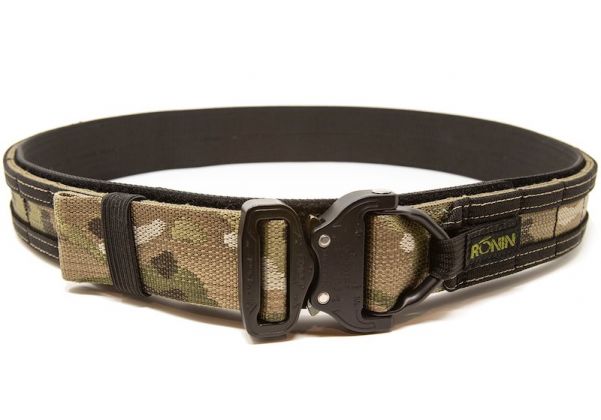 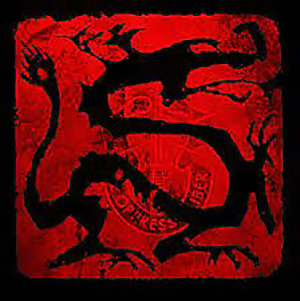 Ronin Tactic's SENSHI belt is the tactical gun belt used by Team Ronin. Made with a nylon weave camouflage material with black trim, this belt provides the shooter with a stiffer platform.

The SENSHI Belt was designed and developed on the battle field by Special Operations soldiers, and is a lightweight and comfortable tactical two layer system that is adaptable to a wide range of holsters and accessory pouches.

This two-layer system ensures a secure shooting platform by combining a inner Hook-and-Loop Fastener webbing belt with a tactical load-carrying belt. The tactical load outer layer allows for 2 rows of 1/2 inch webbing, enabling the shooter to add an assortment of MOLLE attachments. The belt features a newly designed 2 inch Cobra Buckle with an attached D-Ring, which ensures more MOLLE space for the shooter.

This is my first tactical belt, and I have to say…it’s pretty awesome! I kitted mine out in for a “Long Run” scenario, meaning that I could go into vehicles, lay back or stomach down, or run around, and nothing would get in the way! (As some guys know, having pouches and stuff on the back of your belt, does not allow yourself to lay back into a seat and you may have perminate back issues after long periods of time.) And if you are a beginner and have never heard of the company, than you need to know you are buying from a top tier company! And Tu Lam is a very respected person, across the world! Ronintactics.com However, there are some gripes to it… The inner belt GENERALLY works perfectly for a basic EDC open carry belt, but it can get uncomfortable when sitting down or putting a backpack on. See, the belt is so rigid that when sitting down the top of the belt pokes out! And when you have a backpack on, the belt sticks out just enough for the top of the bag to sit on it! Not too uncomfortable, but could be easily fixed if Ronin tactics made a two inch strip of tight bungee material! The Cobra buckle is a little squeaky if you shift the latch around too much, but it only happens when you move it in an irregular way (ex: with your hands, pretty forcefully). There will be a little bit of space between where you Velcro the inner belt to itself, and it’s end will stick out a little. So you will be able to stick a pencil in there, with a little bit of force. The belt is a little thick, even if you have it in a “Long Run” setup. I love this belt, so much! But it the inner belt could use a little work! Worth more like $180 or $190 at most.