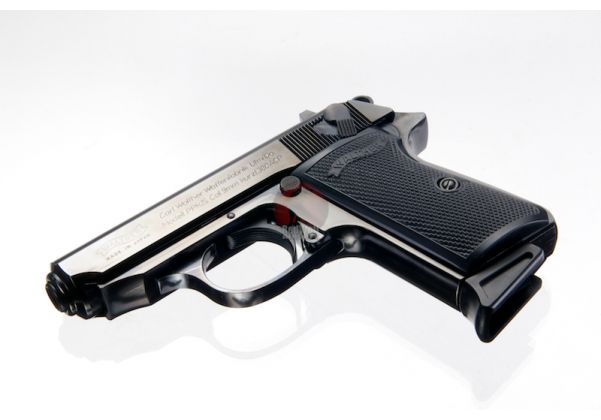 MRZ-166415
Be the first to review this product
In Stock.
Out of Stock.
SKU
MRZ-166415
Email me when back in stock.
Maruzen Walther PPS/S Black Metal version
SHIPS IMMEDIATELY

When you hear the names Sean Connery, George Lazenby, Roger Moore, Timothy Dalton or Pierce Brosnan, the code name 007 will likely come to mind. Well alright, maybe not George Lazenby or Timothy Dalton. Through the numerous Bond missions that have come out of Hollywood's movie machine, there have been an infinite number of eye-opening weaponary, including classics like the laser beam Rolex, amphibious sportscars with on-board missile systems, torpedo launching stereo boom-boxes, and much much more.

But most of us forget the one weapon that gets the spotlight mission after mission; the trusty little hand gun that lives in Bond's tuxedo through love and war - for King and Country of course. Bonds trusty piece, the Walther PPK, has gained its own cult status and will forever be associated with the Bond name. Dedicated Bond fans will know that 007's first gun was a Beretta but that all changed in the first movie; Dr. No.

The Walther PPK (Polizei Pistole Kurz) is a German made pistol. Introduced in 1938, it received wide-spread use by the German Armed Force Commander Units during WWII. It was one of the first commercially successful pistols to have a double action mechanism and was initially marketed as a pistol to the German "Polizei Kriminal", a.k.a. undercover detectives. While the PPK itself isnt too powerful, its size advantage has made it the ultimate pocket pistol. The PPK has trim dimensions and is very flat, making it an ideal pistol for deep concealment or when something larger cannot be carried due to clothing restrictions. The PPK/S (special) is actually a larger version of the PPK and sports two piece grips rather than the PPK's wrap-around grip. The PPK/S also has a longer magazine.

Marushin of Japan has faithfully reproduced the sleek style of the Walther, and has fitted its latest airsoft technology into the compact frame. The mechanical design of the Marushin PPK/S is nothing new and resembles that of most other blow-backs (similar to MGC design). The blowback version is a much improved version of the Marushin-produced non-blowback model, which did not sport Walther trademarks and had a plastic magazine with a 10 round capacity.

Maruzen produced this new "Black metal version", which looks more realistic than ever before despite it's plastic body construction as required by Japanese law. The finishing is beautiful and you would be fooled into thinking it was made from steel. This PPK/S has special laser engravings and the anniversary markings on the slide and magazine. Official license by Walther. The PPK/s is a great but very concealable weapon with single-stack magazine with fixed barrel/spring guide rod.

Great for collectors or secret agent wannabes ala James Bond.

The PPK/S was a real steel revision of the original PPK pistol to meet American import restrictions in 1968. That said, the difference is only minor so if you're looking for a WWII era pistol used by Luftwaffe pilots or just need something a little James Bond the Maruzen option offers you a fully functional Airsoft 6mm gas blowback pistol.

As a Maruzen pistol, it runs on HFC134a / Duster gas (anything of greater pressure like green gas will damage the weapon unpredictably). Using 0.2g BBs it clocks at a modest 220 FPS which has the benefit of making it a nifty back-up emergency weapon for short range use. At 220 FPS it is far more suitable at short ranges than more powerful weapons, and HFC is kinder on the nose than Green / Propane is. The compact magazine stores the BBs in a double stack configuration with a 22 round capacity which is very decent for such a tiny weapon.

It has a plastic slide and frame but it maintains decent weight for a pistol of its size all the same.

The blowback PPK/S comes in two weights; 380g for the standard version and 425 for the heavy weight version, both owing most of their weight to the 22 round metal magazine. The PPK/S has a non-adjustable Hop-Up system which is an improved version over the non-blowback model. As a spy firearm, you may frequently be required to eliminate your targets in silence. The PPK/S has threads already cut into the end of the barrel to accommodate an optional silencer (metal). With the silencer attached, each shot is a barely audibile "phup".

The PPK's sights are the standard Patridge type (front post with a notch rear). The front sight has an orange dot and the rear sight is colored orange in the lower part of the notch. The trigger guard is smooth and rounded. Vertical grooves on the trigger serve to improve finger friction during the double action pull. The hammer spur is round to prevent catching on clothing. On the left rear of the slide is the PPK's hammer-dropping safety lever. When the lever is pushed down, the pistol is on 'safe' and the hammer is safely decocked. The lever is pushed up for the 'fire' position.

Regardless, this is a collector pistol for any serious bond fan. The finishing is spectacular and a treat to behold. Just look at that amazing shine. The photos really don't do it justice. Maruzen doesn't make the PPK every year so get these while they're available. The wait between production cycles is usually at least several years, and prices go up each time!
Product Questions
Customer Questions
No Questions
Please, mind that only logged in users can submit questions
Customer Reviews
Write Your Own Review
More from this Brand (5)