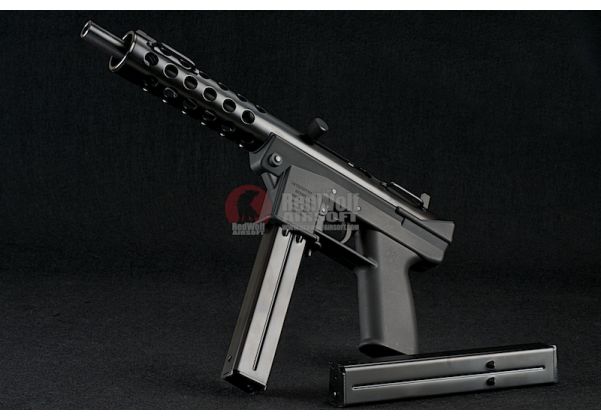 ""It is really extraordinary!" - Mach Sakai

Winner of Airsoft International's Most Accurate SMG Award
In short, this is the only SMG in the market with a PTW system that delivers amazing accuracy and unbelievable shooting distance that shocked the editors of Airsoft International Magazine and Popular Airsoft! What's more, this is a great deal that comes with 2 steel magazines and the battery!
The RWA KG9 AEG is a replica of the real steel, Swedish made Interdynamic KG9 Open Bolt SMP. This is not to be mistaken for the Intratec Tec-9 which was the American version of the KG9. The KG9 is the predecessor, the Grandfather, the original. Sure, it may be one or two holes longer but that's only to make room for the 7.4v Lipo (Mini deans connectors) battery that sit inside the handguard. Apart from that, this thing is a beaut!

There are quite a few KG9s on the market but nothing will beat this one when it comes to it's simplicity in design and functionality. For instance, this one will only shoot in full auto, but this isn't a faulty design due to the fact that the real steel version is a full auto ONLY SMP too. To get to the battery compartment within the handguard, you will first need to remove the thread cover which reveals a 14mm CCW thread, then the cap behind it. You can add a suppressor to the thread, elongating the length of the AEG, meaning you can increase the length of the inner barrel.

The body is a combination of nylon fibre and polymer which gives it a nice shine. This bodes well with the glimmer of the steel upper and magazine. The grip will feel a little large for those with smaller hands as the motor resides inside. Above that is a fusion gearbox with a lower which is compatible with TM V2 AEG gears and the upper being a system ptw style piston, hop up, chamber and inner barrel. This only means you can expect it to perform with precision.

Oh, that it does! RedWolf Tim took the KG9 to a range and it managed to hit a human sized target (Jimbob) from 80 meters away which is amazing for a stock AEG. This only goes to show that the KG9 has huge potential if you decide to upgrade its internals. You won't need to worry about the fixed sights as the BBs fly true on a non windy day. If you want to reach out to 80 meters, be sure to use 0.3g BBs instead of 0.2s. You can't say that about many stock AEGs to date.

Fantastic gun for its size

I love the look of this gun and it's got that crazy spray and pray personality. The most surprising for me is how far this bloody thing shoots for its small size. I removed the barrel tip and attached a silencer to it so that i could install a longer inner barrel, and I'm literally able to snipe with it now although it only shoots in full auto mode. Super smooth and lots of fun. Great deal with the 2 spare magazines and battery.

Awesome piece of kit you wont be sorry

Everything came expect a battery

Ordered one of these, it came with everything but not a battery. It said it came with a battery but the one I ordered didn't [RedWolf] Hi Mane. Sorry to hear about your experience. The KG-9 usually comes with a lipo battery, but the battery is considered dangerous goods so TSA won't allow them on the plane. Hence depending on where you live, they may have us remove the battery from the package and we apologize for the inconvenience caused.

I purchased this gun with the intent of having a full package out of the box. Upon opening i realized the battery was not included. Whether or not this is a TSA issue of lithium batteries not allowed on planes this should have been clearly stated. Now i am stuck with a worthless gun with no compatible battery expect for the one that was removed [RedWolf] Hi Adam. We are sorry for the inconvenience caused but as you stated, the TSA insisted that products cannot contain batteries when we deliver. However, we do ensure you get a compatible battery if you purchased the KG9 from us. If you haven't get yours yet, please reach out to service@redwolfairsoft.com, and our customer service team will get you sorted.

This gun is incredible for the price I got it at (roughly $200). It's a hybrid between a traditional AEG and a Systema PTW making it very accurate. Its tolerances are really tight, so it can be a PITA to disassemble, but I consider that a good thing. Right out of the box mine was shooting at around 300 FPS with .2's (~.8 joules), and easily hit a torso-sized target at 150 ft using .25g bbs, even with full-auto. I wouldn't be surprised if the 80m effective range claims RWA makes are truthful. looking at how it's built, that makes sense. The hopup "arm" is not going to budge once you set it due to how it's actuated, and the hopup unit itself is securely pinned to the receiver ensuring shots are constant. The bucking is special due to the way the nub is shaped. It's two mounds next to each other instead of one central mound, which applies hop evenly and consistently to every bb. I've never seen a stock gun perform so well out of the box for $200. The gearbox was decently shimmed and uses decent quality V2/V3 gears. It is a proprietary CNC milled design, with thick walls and tight tolerances. It should be able to handle any spring upgrade you might want to put in it. It uses a short type motor, and the one it comes with seems decent enough. The Systema PTW cylinder assembly came with what I'm guessing is an SP90 spring in it. I had to replace my piston tooth-rack due to it stripping after an error in reassembly, but I consider that my fault and if you are meticulous that shouldn't happen. As far as I can tell, the assembly is high quality and should be able to handle an SP110 or SP120 spring if you want to increase your muzzle energy --and range-- for field play (although that's honestly not entirely necessary). The only con is that it's full-auto only barring it from being used at many fields and CQB arenas. This issue, however, can be circumvented by using a plug-and-play programmable MOSFET like the Burst Avacado. Using that you can shoot in semi-auto or even bursts up to 20 rounds if you want. You won't have space in your shroud for a battery and a MOSFET though, so you'll need to do some external modifications to fit a hollow foregrip to your shroud to store the chip, or you can store the chip in the shroud and use a container of some sort to externally store a battery. The battery space is the only thing I can think of that is an overt negative. Even with the elongated shroud and special-sized battery, it's a really tight fit and it can be a pain to insert and remove the battery. The mags are built like hammers and hold a respectable 90 rounds. Best built $20 magazine I've ever used. The only weak point is the feeding lips. They can crack if you repeatedly slap the magazines in too hard while they are misaligned with the hopup feeding tube. Just don't be an ape like me and they should be fine. I'm currently in the process of turning this into a mean-field gun by increasing the barrel length by ~60 mm, putting an SP120 spring in it, maybe putting a stronger motor in it, and fabricating a collapsible wire stock based on the Interdynamic MP-9, the gun the real Tek-9 was based on. I'm also probably going to fabricate an external battery compartment out of PVC for a Titan Power 7.4V 3000mAh Li-Ion battery. I expect it to perform outstandingly. Pros - Unreal accuracy out of the box - Decent ROF - Awesome build quality and tolerances - Not super heavy Cons - Limited battery space (even with the elongated shroud). Modification is required to fit larger batteries. - Slightly more mechanically complex than a normal AEG - Basically no aftermarket support. I hope you like fabrication if you want to modify this. - Full-auto only bars it from use in a lot of fields and most CQB arenas unless you modify it. I let one of my friends use it for a day and he ordered one on his phone before we even left the field. It's seriously that good. It feels good to shoot, bb's go where they should, and every tag is a dopamine hit.