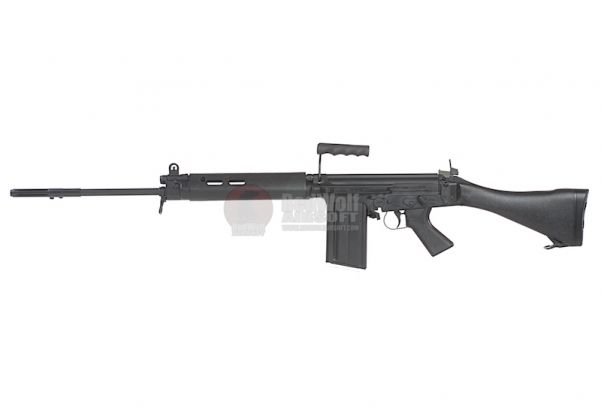 AR-024-P
Be the first to review this product
In Stock.
Out of Stock.
SKU
AR-024-P
Email me when back in stock.
SHIPS IMMEDIATELY
DESCRIPTION

The FN FAL (Fusil Automatique Leger - Light Automatic Rifle) is one of the most famous and widespread military rifle designs of the XX century. Developed by the Belgian Fabrique Nationale company, it was used by some 70 or even more countries, and was manufactured in at least 10 countries. At the present time the service days of the most FAL rifles are gone, but it is still used in some parts of the world. The history of the FAL began circa 1946, when FN began to develop a new assault rifle, chambered for German 7.92x33mm Kurz intermediate cartridge. The design team was lead by Dieudonne Saive, who at the same time worked at the battle rifle, chambered for "old time" full-power rifle cartridges, which latter became the SAFN-49. It is not thus surprising that both rifles are mechanically quite similar. In the late 1940s Belgians joined the Britain and selected a British .280 (7x43mm) intermediate cartridge for further development. In 1950 both Belgian FAL prototype and British EM-2 bullpup assault rifles were tested by US Army. The FAL prototype greatly impressed the Americans, but the idea of the intermediate cartridge was at that moment incomprehensible for them, and USA insisted on adoption of their full-power T65 cartridge as a NATO standard in 1953-1954. Preparing for this adoption, FN redesigned their rifle for the newest T65 / 7.62x51mm NATO ammunition, and first 7.62mm FALs were ready in 1953. Belgium was not the the first country to adopt their own rifle in 1956. Probably the first one was a Canada, adopting their slightly modified version of FAL as C1 in 1955. Canadians set to produce C1 and heavy barreled C2 squad automatic rifles at their own Canadian Arsenal factory. Britain followed the suit and adopted the FAL in 1957 as an L1A1 SLR (Self-loading rifle), often issued with 4X SUIT optical scopes. Britain also produced their own rifles at the RSAF Enfield and BSA factories. Austria adopted the FAL in 1958 as a Stg.58 and manufactured their rifles at Steyr arms factory. Various versions of FAL were also adopted by the Brazil, Turkey, Australia, Israel, South Africa, West Germany and many other countries. The success of the FAL could be even greater if Belgians would sell the license to W.Germany, which really liked to produce the FAL as a G1 rifle, but Belgians rejected the request. Germany purchased the license for Spanish CETME rifle and as a result of this H&K G3 rifle became probably the most notable rival to FAL.

What we have here is the British 'Inch version' of the FAL, which is known as the L1A1 Self-Loading -Rifle (SLR) and the SLR has been in service with the British forces until they were ultimately replaced by the SA80. The L1A1 SLR Rifle have seen a lot of combat around the world including the Falklands campaign, where both parties had basically the same rifle, Argentinians had fully automatic FALs and the British had the semi-only L1A1 SLR.

In the airsoft world, Ares decided to re-introduce the L1A1 SLR to the world, it is a fully metal constructed rifle with polymer furniture. The magazine holds 120 round and is inserted like an AK magazine, front in first, then rock the back in, removes with a paddle magazine release. Battery is accessible on the stock and the butt pad rotates and reveal the battery compartment with a small tamiya plug, taking a 7.4V lipo stick type battery in it. Hop uo adjustment dial is accessible when you pull back the charging handle and the hop up adjustment window would open.

*Note: Because this is a L1A1, it will not have full automatic fire mode*