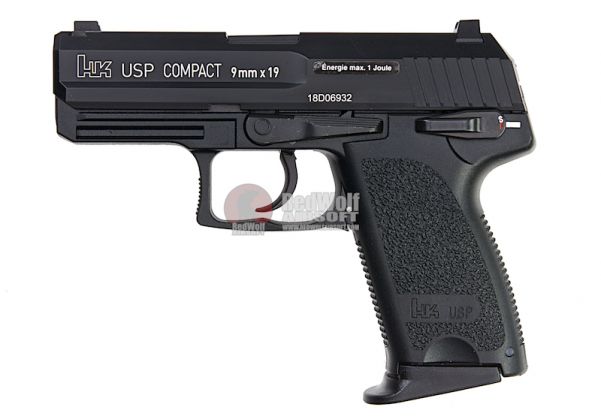 UMX-25682
Rating:
100% of 100
1  customer Review | 1  answered questions
In Stock.
Out of Stock.
SKU
UMX-25682
Email me when back in stock.
SHIPS IMMEDIATELY MAP PROTECTED
DESCRIPTION
The USP (Universale Selbstladepistole or "universal self-loading pistol") is a semi-automatic pistol developed by Heckler & Koch GmbH (H&K) of German origin and international fame. It was developed throughout the late 80s and 90s with the USP45 being released in 1995. It was designed as a competitor for the OHWS (Offensive Handgun Weapon System) requested by the U.S. Special Operations Command (USSOCOM). Since its introduction, it has quietly slipped into mainstream TV, Cinema and video games with numerous appearances over the years, particularly the USP Match.

This GBB pistol handles HFC134a / Duster gas as well as TOP / Green / Propane gas; obviously it will cycle cleaner and clock in higher on Green then it does on HFC but the lower pressure HFC will prove less wear and tear on the mechanism. On Green / Propane, using 0.2g 6mm BBs it clocks in at around 370-390 FPS with the first shot or two at 390 then the rest of the magazine at 380 or 370. Over 10 shots with 2 seconds between each shot it averages 370 FPS.

The confidence to run on Green / Propane out of the box, a metal slide, the sting of 370 FPS and a magazine capacity of 25 rounds makes this pistol a solid contender for an out-of-the-box skirmishable hand cannon. Although the pistols externals are mostly polymer, it is still fairly durable and is fairly hefty at around 1.1kg. With this level of power, it can also clear full length corridors and really be felt at ranges to give carbines a run for their money.

The USP Compact is similar in shape and layout to the other Umarex USPs but is physically shorter in both slide/barrel length and pistol grip and uses a shorter magazine. Although it can handle both HFC134a / Duster gas as well as TOP / Green / Propane gas it will cycle much cleaner and perform better on Green. With 0.2g BBs it will achieve about 320 fps on the first shot or two and then sink down across 310, 300 and 290 across the magazine (with 2 second pauses between each shot), overall averaging 300 FPS across ten shots. With a 22 round magazine, that makes it a comfortable short range / indoor pistol. The Umarex USP variants are all similar but still have notable differences which is exactly why it is most definitley worth looking at all three to work out which one suits your pistol needs more appropriately.

Although not as popular as the ubiquitous triad (Model 17 / 1911 / M9) the USP maintains a second tier spot in terms of compatibility with common aftermarket gear like holsters. This combination of performance, quality and loadout compatibility make this a pretty great buy overall.
Specifications
Reviews
Write Your Own Review
Top Customer Reviews

I have owned an old USP Tactical for a while and it was a workhorse that just never died. After about 5 years of heard use it finally gave out. Since I had a good experience with that gun I said what the heck. The compact is nice and I even managed to find a good holster for it. Being a compact gun I always mounted it onto my plate carrier instead of my belt. I have been taking this pistol to games and it just works. Love it