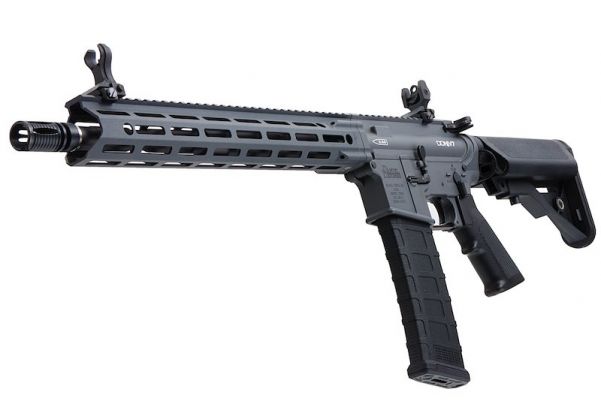 The DDM4 V7 is marketed by Daniel Defense as a competition gun that users can use to compete in multi-gun matches as it is designed to be lightweight yet robust and has low recoil allowing for faster follow-up shots.

The EMG Daniel Defense Licensed DDM4 V7 MWS gas airsoft rifle is fully licensed replica. Although it has some visible differences compared to its real steel counterpart, the EMG rifle is a pre-upgraded gun out of the box. Internally, the gun utilizes the famous MWS system and features many G&P aftermarket internal parts, G&P being one of the top manufacturer of quality aftermarket MWS parts, you can be reinsured that this rifle is built to preform similar to the real steel V7!

Externally, the gun has a uninterrupted picatinny top rail, similar to most of Daniel Defense's rifles and a lightweight M-Lok rail for all your accessories need. The outer barrel, just like the real steel version is a free float barrel, and at the end of the barrel is a 14mm CW threaded, allowing for different muzzle devices. The bolt, receiver, rails and charging handle all have DD markings, while the dust cover and forward assist are of Strike Industries. The stock is also quite nice as there is almost no play to it, making it a very stable platform.

Lastly, the gun comes with a G&P 40 Round GMAG-L, giving you more rounds compared to most MWS system magazines.