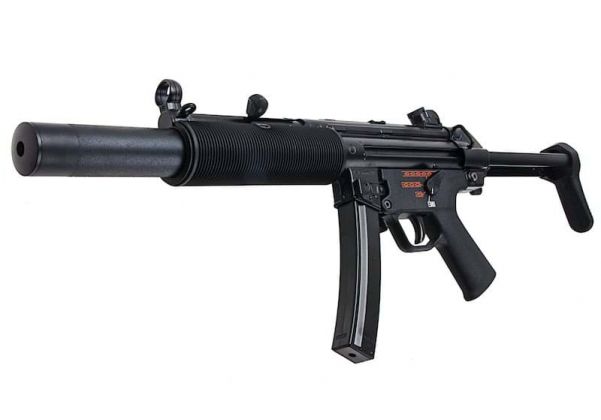 Born in West Germany in 1965, H&K's MP5 is a submachine gun that boasts outstanding accuracy by applying the company's G3 firing system. It uses a pistol bullet that has a weak recoil and is easy to control, compact and easy to handle. Highly rated.

The MP5, which is used not only by Germany but also by special forces such as the United States, France, and Japan, has developed a large number of variations according to the requests of individual organizations. In addition, due to a large number of formal adoptions, there are many opportunities to appear in various news, movies, and games, and it is a famous gun that boasts very high popularity and name recognition here in Japan.

The Tokyo Marui NGRS or Next Generation Recoil Shock platform has long been considered the best electric recoil system for airsoft guns. This system has brought us many successful products such as the various ARs, AK,s and SCARs. Now, the NGRS comes to the universally loved Tokyo Marui MP5 with much excitement!

The fit and finish of the TM MP5 NGRS is top-notch, as we have come to expect from Tokyo Marui. The weight and dimensions are 1:1 with the real steel counterpart! The upper receiver is robust and adds to the overall weight of the product. This weight makes it one of the first airsoft guns from TM that truly doesn't feel like a "Toy". Adding to its realism, the gun's magazine can be switched from its current 72rd capacity to a realistic 30. Combining this with its last round cut-off feature, you will enjoy one of the best AEG experiences!

The MP5 NGRS comes feature-packed such as an internal MOSFT and a dry-firing mode! Not to mention it includes a tri-lug to 14mm CCW adaptor for easy mounting of suppressors.

**Note: The logos and trademarks on this product are only legal for use in Asia. Export of this product outside of Asia will require that the logos be permanently covered with a plastic strip or be removed by laser. Please be aware of this prior to purchase.**